The Handmaid’s Tale - When is she going to get what she deserves? 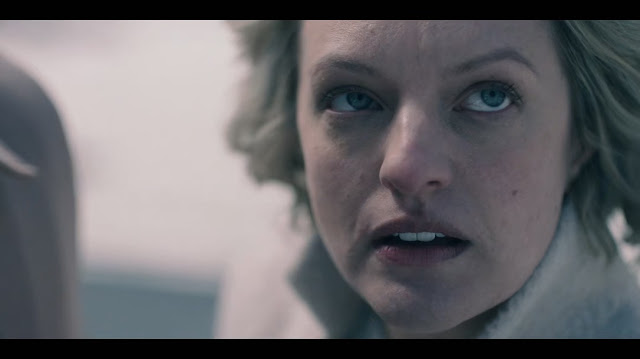 What a time to think about the meaning of prescribed national mourning and the pomp of a heavily choreographed and expensive funeral during an international crisis – of health, living costs, the environment. After the death of Australia’s head of state, politicians and sports people who spoke out openly about the corrosive effect of colonialism on indigenous people were censored, protesters on the streets were arrested. A funeral is never for the person who is being buried, always for the people left behind – meaning both on the personal level, that it is about grief, and when it is a political occasion, about the entrenchment of an existing power dynamic, an event that is meant to showcase both reverence and the continued power dynamics when the line of succession is already cemented.

Serena goes back to Gilead for her husband’s funeral. Everything here is staged – this is a woman trying to find a way back to power independent of her disgraced husband, who is now considered a traitor, who died because he had lost the protection of the regime he helped create. She holds a few cards – Mark, for one, who appears torn between the advancement of his own career at all costs, the power interests of the American government in exile, and his genuine fascination with his charge. Her arrival in Gilead is awkward because of how Commander Waterford died – both the circumstances of his disgrace (his willingness to sell out Gilead to survive) and his death (torn apart by the women he wronged in the wilderness where no national laws apply). Serena is shown a small, dingy church, is told that a quiet, quick affair would be in everyone’s best interest, so that she can return back to Canada just as quietly, a dangerous thorn in the side of the regime removed. But we know who Serena is, a woman who created this place just as much as Fred did, who always suffered for not being recognised as one of the architects. She exploits the power relations as she sees them – her connection to Mark, Nick, Commander Lawrence – and her amazing political play pays off. They agree that the only way for Gilead to be internationally accepted, to leave its status as an international pariah, is through headlines that distract from its humanitarian record. And what better story to tell than that of a grieving woman at the centre of a state funeral, celebrating the life of a fallen hero, regardless of who that hero truly was behind closed doors? 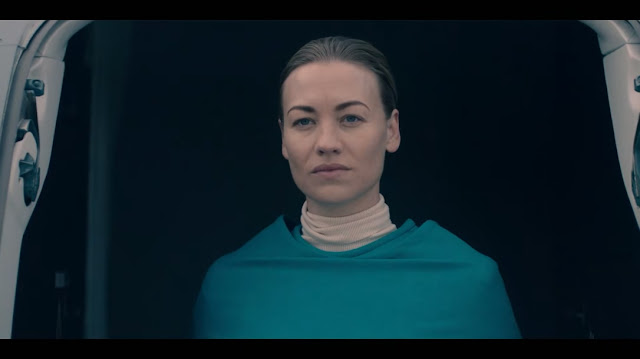 Beyond Serena’s political aspirations here, there is the fact that June (as she tells Luke, who doesn’t quite seem sufficiently horrified) sent her a severed finger with a wedding ring on it. This isn’t just about Serena’s future, who does not want to be sent back to Canada to live a quiet, unremarkable existence, it’s also about her quest for revenge against the woman who killed Fred, who almost managed to fully expose her own cruelty (and how ironic is it that Serena must fear being seen as a woman who hurt one person more than being seen as an architect of a system of slavery?). Fred, over the last few seasons of The Handmaid’s Tale, lost so much of his potential as a worthy adversary for June – he was tired, powerless, an expression of every cliché about toxic masculinity. Serena is so much more complex – no less horrible, but all the more dangerous because she is trying to be powerful in a system that denies women power (it is fitting then that it is Commander Lawrence who has to deliver her words to the Council, and succeeds because, as he says himself, he is not a woman).

Over the border, June continues to refuse to deal with her trauma the way that her friends and family want her to. They meet for a joyful game of Scrabble, she can’t help but remind Rita of how cruel Serena was to her. Luke wants to be a happy family, but she cannot let go of her traumatic memories of being abused by Serena, by her fantasies of revenge against the woman who stole her first daughter. She appears to make progress when they go to the ballet – June in glowing white, a perfect contrast to the colours of Fred’s funeral, which happens at the same time – but of course, just as she and Luke appear to reconnect, their eyes fall on the gigantic screens which are showing a live broadcast of the event. And of course, Serena knows exactly what other cards she can play, and it’s Hannah on screen, taller and more grown-up than June’s ever seen her, giving her flowers and receiving a kiss on the forehead. Serena isn’t grieving Fred’s death, she is conducting a massive production to cement her own power and to draw June back into a place where she can hurt her – and she knows June has no other option than to come to her. 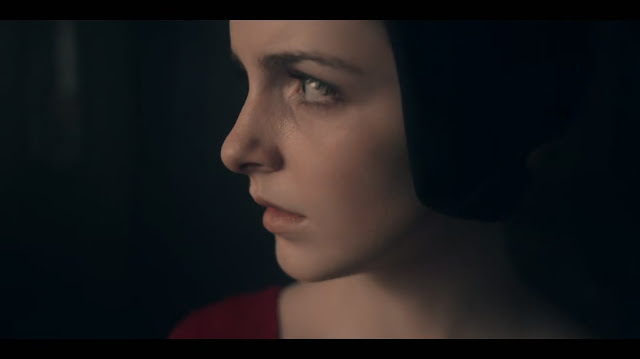 Mark tries to convince Nick to become an agent for the US government in exile in exchange for maybe one day being able to reunite with June and his daughter – but I’m beginning to think that Mark doesn’t quite have the capacity to run this operation, that he constantly overestimates himself and underestimates those he thinks he controls.

Because this show continues to choose violence against Janine – Lydia takes the handmaids in her charge to the Putnam’s house to get Esther a placement as their new handmaid (where Janine gets a short and sad reunion with her own daughter), and Esther comes back with gifts after a terrifying encounter with Commander Putnam, sharing chocolates with Janine. Mid-meal, she reveals that she thinks that Janine is only using her, and true to her nature, she’s poisoned the chocolates. The show is doing very interesting mirroring here with June’s refusal to give in to all the pleas for a normal life and Esther’s refusal to stay quiet and survive, but once again, Janine ends up as collateral. I really hope this isn’t it.

I was sad to hear that Alexis Bledel’s Emily won’t be back, who I’ve always thought was an interesting counterpoint to June, even if the last few seasons didn’t do much with her character.

It will be interesting to see how this show will investigate the idea of a pariah state sneaking its way back into the international community without any true improvements for its citizens – there have always been hints at the international opportunism in regards to Gilead (Mexico wanting to import handmaids, for one), and it would be eloquent for once to not always have Canada as this beacon of difference across the border. I think Mark, hapless or not, is a good expression of what opportunism and weighing the value of human life looks like.