The Handmaid’s Tale – Whose blood is that?

Why does it matter whose fault it is? So that I can hate the right person? What good is that? 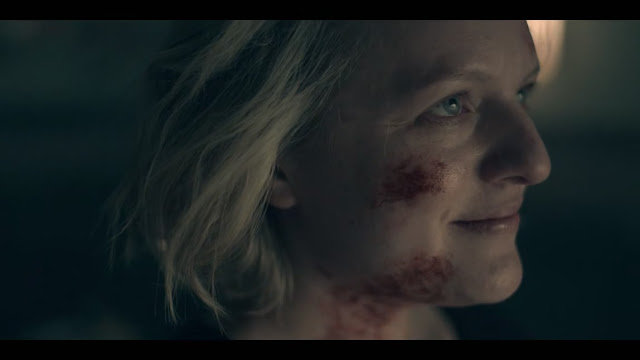 Every time a new season of The Handmaid’s Tale begins, I question why I feel compelled to return – but I do go back, again and again.

Morning begins where the last season left off – June returned to her home, covered in Fred Waterford’s blood, reluctant to wash it off. She has not reacted the way that Moira and Luke expected her to react. She is elated, happier than we’ve ever seen her, replaying the violence not with horror, but with joy. For the longest time in this episode, “I killed him” are the only words she speaks. She has waited so long to take revenge, to kill the person responsible for her suffering, and now that she has succeeded, it does not feel stale, or painful – it feels great.

Maybe this hesitation on the part of the show for June to react the way we would expect her to – the way we’ve been conditioned by other stories to think she should feel about this – is the best part of it. June has suffered horribly. She has lost so much. Fred was very clearly responsible, not just as the person who physically and mentally tried to break her, but also as the creator of a whole regime that does this to women. Ever since she crossed the precious border to freedom, people have requested that she find her peace, find normalcy again, but she hasn’t been able to – and maybe she shouldn’t. But what gets her in this episode isn’t necessarily the idea that her act against Fred was violent and transgressive – it’s how impossible it is to think of herself as the person who took her revenge, and as the person who will gently raise Nichole into a life different from hers. She drives away from her family because she can’t see how she fits in anymore, but all she finds are the other women who helped her and now demand for her to do the same for them – to tear into their monsters, as they have torn into hers. But their revenge isn’t hers, and the only person who may be able to provide some perspective has crossed the border back into Gilead to go after Aunt Lydia.

It is sad and tragic that Emily has gone back, and there is a version of the show where we may have accompanied her on that journey, and maybe seen her succeed, if it weren’t for Alexis Bledel leaving the show. Without that opportunity, her return feels like certain death – this is the last we, and her wife Sylvia, have seen of Emily. The scene of June knocking on their door to find out that Emily, the one person who came to Canada but never really arrived, like she has, is one of the best the show has ever done. Clea DuVall (I am guessing that unfortunately, this is now also the last we and June will see of her) gives a devastating, understated performance here – no tears, just recounting how Emily called her, and said she didn’t want to speak to their son one last time. Just the realisation that the time they did have with each other was unexpected and all the more valuable for it. She would have realised that she could never have the Emily back that she lost all those years ago at the airport, and she doesn’t even seem bitter about it, just like the inevitable finally happened and she had a lot of time to prepare for it. For June, it’s bad news though, because it solidifies the idea in her head that she can’t go back to her family. Instead she goes to the police station to confess to murder, against Luke’s protests, but is informed that the murder happened in literal No Man’s Land, in a disputed area between Gilead and Canada where there is no law. The crown has no quarrel with her, she will have to face her demons alone, all she has to pay is a (truly laughable) fee for transporting Fred’s finger back across the border. It is, in a way, a beautiful and brutal irony that Fred’s life, in the end, is worth only $88 (which can be paid online).

Serena finds out about Fred’s death when she is transported from her prison cell to a different facility. Mark tells her, tells her also about the two gifts that arrived for her, the finger and the wedding ring. It’s enough for Serena to know exactly that Gilead wasn’t responsible for his death, that it was June’s doing. There are moments here where Serena remembers the few happy moments of her marriage, a reminder that they weren’t just a political power couple engaged in a struggle over who truly built Gilead – once, they loved each other, once, their marriage was happy, and she is grieving that man. The other side to it is that Serena’s power has always been bound up in Fred’s – in Gilead, she is worth nothing as a widow (the so far pretty great The Serpent Queen stipulates that being a widow is the best a woman can be in circumstances of limited agency, we'll see I guess), and so the wheels about her position in the world, and how to advance it begin turning immediately. Mark sees all that and warns June about it – both the fact that Serena is dangerous (which she would have been anyway, June reminds him), and that Gilead won’t take kindly to a handmaid killing her Commander.

Moira’s reaction to what June did is a reminder of why these two have been so distant, and maybe also reminder that the only other person who truly went through what June experienced is Emily (and Janine, poor Janine, who is still stuck, who is much more visibly damaged from her trauma). Moira sees June and fears for Nichole – but in the end, June returns to her family and showers her daughter in kisses, as if maybe there is a way forward, at least for a moment. But it is difficult to imagine a world in which both Serena and June survive.

As an aside, we see Nick – going home to his beautiful house, his wife who he can actually talk to. A wife who knows what June did, and supports it – a reminder that people live in fascist regimes, live lives that resemble normalcy. They are as privileged as you can be in Gilead, and maybe the wife hopes that Nick will one day forget about June and his daughter, but it’s unlikely he will. I don’t think this will end happily for him.

There is also a certain irony that the one moment where June feels supported in her actions in this episode is in her conversation with Mark Tuello, the government spook, who gets what it takes to do what is necessary, the toll that it takes.

Beautiful symbolism here too with June, reluctant to wash off Fred’s blood and then being reborn when she finally bathes in nature – as well as Nichole’s unhappiness over being bathed by her three parents, and June’s promise she will never have to take a bath if she doesn’t want to.