The Handmaid’s Tale – I hate this world. 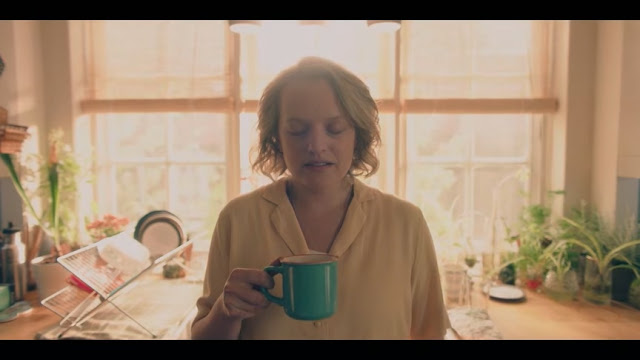 This season has been about the precarious shifting state of safety. June has escaped Gilead to Canada, where she is meant to be safe, but that haven is turning into a threat. Serena was meant to have found a balance between Gilead and the political influence that was denied to her, but this idea almost immediately turned on her and delivered her to a prison. They are both refugees who are realising that they will never truly arrive, will continue to have to seek out a place free of harm.

For now, June is still in Canada, and all of her dreams of reuniting with Hannah are dashed. Commander Lawrence’s offer of New Bethlehem is not real anymore – she suspects that he is behind the attack on the memorial service, and will continue to hunt her because of the danger she poses if she is left alive. She’s bought a bullet proof vest, but her days still look the same – a peaceful cup of coffee, surrounded by family. She walks outside and notices that her neighbours are moving, that something is happening. And then a car creeps up on her and hits her, reversing over her hand, ready to kill her before Luke intervenes.

It's interesting to think of Commander Lawrence as the evil force behind this season, which has mapped his ascent to power. Is he more or less dangerous because he isn’t a true believer in Gilead, only uses its values to build a world he believes is better than the one he started with? We thought for a moment that his introspective moments with June where he talked about delivering on promise to his wife meant that he would be an ally, but it turns out that this particular zeal (the zeal of the ringbearer, if you’d like) is even more dangerous. After all, the Commanders surrounding him don’t even seem to be driven by religious zeal anymore, they have built a life that delivers them all the possible comforts and are only eager to maintain the lifestyle. The zeal of a man who believes it is in his hands to make the world a better place is much more dangerous than that, especially in a man who once thought that concentration camps and handmaids were a way to deliver that world.

Commander Lawrence’s ability to make others believe in him is one of his most dangerous qualities. Lydia has spent this entire time thinking that she has his ear, that it is her influence that is changing Gilead for the better and improving the lives of her girls, especially Janine. She knows there is a timer on how long Janine can remain safe in the Red Centre (where there are tiny signs of mutiny, all the girls joining in on “It’s a Hard-Knock Life” while scrubbing the floors and furniture). Now that the marriage between Naomi Putnam and Commander Lawrence is going ahead, she sees an opportunity: what if she places Janine in the new Lawrence household, where she can reunite with her daughter? The way she presents the idea to Naomi Putnam, who is reluctant to let Janine back into her life, shows how sure Lydia has become of her position. She claims it would show forgiveness, would showcase these new Gileadean values that Commander Lawrence is spearheading in his publicity campaign. She didn’t check with Janine first, how is determined to never go through a placement again.

Lydia has also missed how much Janine has changed, how much of the placid behaviour that has made Lydia think of her as a daughter has been an act of sheer survival. Mrs Putnam was there for most of the horrible things that have happened to her, and she can’t keep up the façade any longer when Naomi calls her Ofjoseph (we haven’t heard these names used in a long time now) – she disabuses Naomi of the notion that she could ever be her friend and tells her that she hates her. Later that night, back at the Red Centre, the eyes come knocking and take her with them, Lydia loudly protesting that she will use her connection to Commander Lawrence to free her girl – but it comes to nothing, but Commander Lawrence is the one who signed the order. Now that he has all the power he ever wanted, he can shape his realm as he likes. 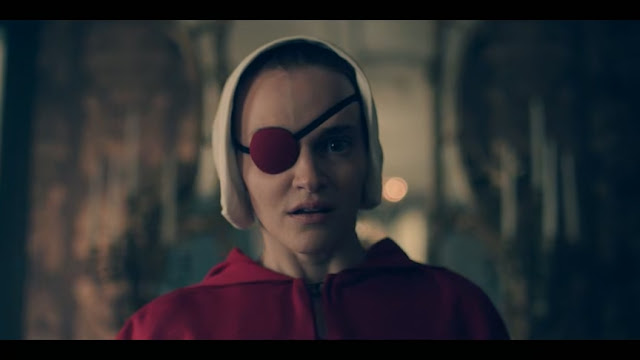 And then there’s Nick, who is particularly useless in this episode. He realises that his ally is going to kill June, that he is behind all the attempts on her life, and meets Mark to secretly take him to June’s hospital room in exchange for a contract that proves to be irrelevant once his anger takes over and he punches Lawrence in the face. It’s the most useless act, resorting to physical violence against a man who wields so much power and is so smart at turning every situation to his advantage. Of course, Nick is arrested, and of course, his wife, now threatened with the prospect of losing her standing in society, along with the realisation that her husband has never stopped loving June, leaves him (she is the daughter of a Commander, and so presumably very able to actually divorce him, or be rid of him in another way). For all his claims that he is merely trying to protect his family, he has never found an effective way to deliver on that promise for either of them, not Rose, not June, not Nichole or his unborn son.

It is an interesting parallel to Luke, who falls into the hellhole of Canadian anti-refugee sentiment propped up by the legal justice system. The man who tried to kill June in broad daylight in front of her home dies of the injuries Luke inflicted when he rescued her. Rita tells him that there is likely an arrest warrant out, but of course the riled-up people who have been protesting at their door steps for the last few months likely won’t wait that long before they deliver their own idea of justice. June sees what is happening, and how it parallels their experience when America was becoming Gilead. They waited too long to escape. They lost Hannah. She won’t let that happen again, and so they decide to run in the middle of the night. Mark arrives in the nick of time to tell them that they will be stopped at the airport, and provides them with train tickets and new identities so that they can leave for “the West” (Vancouver), where they’ll be able to cross over to what remains of the actual United States. They arrive at the chaotic train station, where hundred and hundreds of refugees are trying to leave a city that doesn’t welcome them anymore. There’s military and police everywhere, and at some stage, Luke must realise what he has to do – almost as if he is delivering on a promise he has been trying to fulfil all season, after Serena reminded him that he hasn’t sacrificed as much as June has. He tells June to go ahead with Nichole, and then he watches them get on the train and stays behind, knowing the train will never leave the station without the police apprehending him. They are once again separated, and June once again has to do this by herself, but at least, this imprisonment has bought her freedom.

It's almost a whole episode without a glimpse of the woman who manufactured her own freedom last episode, who took that exit door as fast as her feet could carry her. But of course, Serena and June have been in this weird ambiguous spiral of loathing and dependency for such a long time now that the final scene is inevitable. June, carrying her child, spots another baby, and steer towards it out of instinct, to soothe Nichole’s crying. And there she is – with the weirdest smile on her face, because they might never ever be friends, but they’re in it together again.

Can Janine please, just for once, not find herself in a situation even worse than she’s already suffered.

There is a tiny moment when June and Mark talk about another upcoming memorial service and June mentions that she once was responsible for people who died – and what a long list that is, last remembered in the flashbacks to the traumatic birth.

Naomi Putnam’s assumptions about her relationship with Janine mirror Serena’s so perfectly, and she is told off in exactly the same way.

Lydia enjoying her girls singing together but suggesting a more traditional hymn is a great moment that shows how little awareness she has, and how good Janine has been at uniting the girls, just short of some kind of collective action.

Before she blows everything up in the Lawrence household, Janine hears from one of the Magdas that June has been injured in Toronto – the Magda is furious, says that “they never let anyone get away”. Another sign that something is brewing in Gilead that Lawrence will have to contend with.

I’ve been on the outskirts of fandom long enough to find it vaguely amusing that the Handmaid’s Tale most fucked up ship kind of sailed at the end of the episode. What a mix of millions of emotions on both their faces when they meet.