The Handmaid’s Tale – So what’s next? 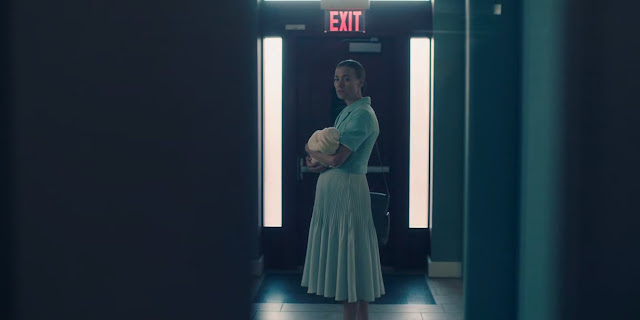 There is such a comforting, popculturally induced promise to the rescue operation that June and Luke witness as they desperately wish for their daughter to come home to them. It is always a one-sided promise that mostly leaves out the other side of it – how many films have we seen where the Americans roll up with their superior technology, where special ops successfully execute a plan just like the one that Mark presents to them, with no mention of what could go wrong? They meet the charismatic commander, they hear about his own family that he is so eager to go home to. Mark is telling June that she had done her part – she has delivered the information they needed – and now it is time for these highly trained soldiers to step in and reunite them, for her and Luke to simply look at the many, many screens that represent their daughter’s location and watch her return to them.

Of course, nothing goes as planned. June watches the three planes approach Gilead’s border and blink out of existence as Mark herds them outside, the situation room panicking. Later he tells them that someone must have misled them, or informed about the plan. The anti-aircraft missiles were right there, waiting. No survivors, but Hannah is safe in her school.

Right before catastrophe hits, June imagines her, visualises her. It’s unclear if what we see here is what she wishes so desperately or actually a glimpse of the elusive daughter. It’s a warehouse, little tents with beds arranged around a station that holds an Aunt to watch over them. Hannah secretly writes her name – her real name – under her drawing. June would love this to be true, for her daughter to remember herself the way her mother remembers her, but would she, after so many years of being someone else and of living in Gilead? It would have been interesting to see Hannah back in Canada, adjusting to the life that June always intended for her. It’s not the story that The Handmaid’s Tale wants to tell, at least not yet.

Meanwhile, Aunt Lydia has bullies Commander Lawrence into solving his respectability crisis and lined up Mrs Putnam as another marriage option. He stumbles over the proposal, making it clear that the actions of her husband do not reflect badly on her but that he is less than eager to have her in his life or in his house, but it looks like both of them are out of other options. The successful thwarting of the rescue attempt is a great publicity opportunity, once again, for Gilead, playing the victim. Lawrence asks June to once again reconsider his proposal of New Bethlehem, where she would be welcome if she condemns Mark’s actions, because what could be more powerful than June turning against America and returning to Gilead? June turns him down, begging for Hannah to be allowed into Canada, and Lawrence tells her it’ll never happen. There is a gruesome moment where June, furious, tells Commander Lawrence that his wife hated him, that she watched her die and did nothing, but it looks like he already suspected that. It also seems like maybe he is genuine when he says that he is trying to improve Gilead and help June with Hannah because his wife would have wanted him to, but how convenient is it that it also currently serves what he needs politically?

Mark suggests to June that if Lawrence is no longer someone she believes she can rely on, there is still Nick. He doesn’t tell her how vehemently Nick turned him back when he offered to help him, or what Nick’s situation is. Hoping that his love for her and Nichole will be enough to convince him, June meets with him, only to find out that Nick truly cannot afford to put himself into that kind of danger again. Not only is he married, but his wife is pregnant, which means that whatever June could promise about Nichole now holds less weight (in a short scene, we see the other wives tell Rose about the genetic dangers of giving birth to her own child, “considering”).

Where June is considering her daughter’s future from afar, Serena is confronting Noah’s from close-up. She has taken June’s advice to try and play the placid Handmaid, but of course it does not come easily to her, and apparently, seeing Serena with her son has unsettled Mrs Wheeler so much that she is dangerously close to violence. Serena knows that the only reason she is there is because she is nursing Noah, so when Mrs Wheeler asks her to pump again and to get Noah used to being bottle-fed, it is an existential threat to their precarious arrangement. It also puts a clear time-limit on her presence in the household – there isn’t even any pretence left that the Wheeler’s don’t intend to keep Noah for themselves. Serena sees Mr Wheeler as the weaker link, and the one she can make a political argument to: shouldn’t she be at the opening of the rebranded fertility centre, to sell the whole mother-and-child package to aspiring Canadian mothers? He agrees, causing a brutal outburst from his wife who slaps Serena twice. It is interesting to watch the reactions of the sympathetic nanny, who I think goes from sympathy to full-on support in this episode, becoming an unspoken ally for Serena. Mrs Wheeler tries to send her home early without Noah, and Serena, knowing that her time is running out, manages to convince them that she needs to nurse Noah first. The nanny gives her the go-bag, as if she already knows exactly what will happen. There’s a big glowing exit sign on the door, and Serena runs through it because she knows her life depends on it.

I think maybe we went a little bit overboard here with the symbolism of the vigil at the end, with the little girl trying to recite the Pledge of Allegiance and protestors shouting the background. I don’t think that this show does itself any favours when it tries to make an emotional impact with patriotism, even when it attempts to do so by showing the American citizens suffering xenophobic attacks.

Aunt Lydia gives one of the greatest comedic performance in Lawrence’s pathetic attempt to propose marriage to Mrs Putnam.

Mrs Putnam was hoping for a small condo in Brookline as repayment for all of her suffering. No dice!

Mrs Wheeler seems less dangerous the more unhinged she is – in the reverse situation between June and Serena, the latter was always at her most dangerous when she was controlled and calculating. It is also maybe too stereotypical of her to resent Serena more because she thinks she is going for her husband, while missing the more obvious support she is getting because she is pitied by the nanny. These two idiots aren’t exactly the great villains we were maybe promised (Commander Lawrence, on the other hand…).