The Handmaid’s Tale – I need you to take care of yourself. 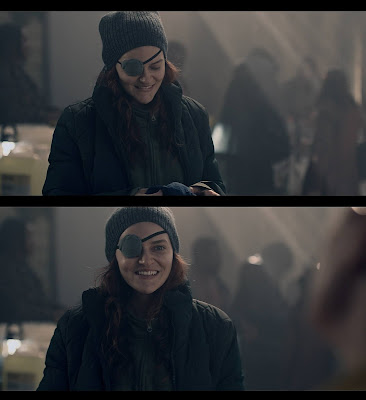 Commander Lawrence said it only a few episodes ago. Gilead’s pretence of caring about the children most of all is nothing but a front for a regime that is solely about men gaining and retaining power. Appealing to Gilead’s better nature is impossible, because stripped of all of its veneer, beneath it lies nothing but male supremacy. Lawrence knows this because it is exactly what drives him, and we see it more clearly than ever in this episode, when he loses face in front of the Council because nobody, including his supposed ally Nick, supports his motion of a ceasefire in the contested territories at the borders. He is fuming, internally, to have lost his position of power and to depend on an upstart to regain it. It hurts his ego, and there is nothing more dangerous in Gilead than a man with hurt feelings who feels his own power slip through his fingers.
It’s perfect that he intersects here with the second most dangerous thing, a privileged white woman with a twisted sense of morality who has also had her power slip. Aunt Lydia is living the Aunt-version of retirement, including puzzles, bridge and light exercise. She regards a new group of Handmaids through the window, and her fingers twitch, eager to get her hands on them. A young upstart, the new her, tells her that her role now is rest, insinuating that her handling of June and the escaped Handmaids has cost her any chance of returning. Lydia fumes, Lydia rages, and Lydia forms an unlikely alliance with Commander Lawrence, in which they both get reinstated to power. Lawrence gets all of Lydia’s dirty secrets about the other Commanders so that he bribe himself back into a seat at the table, and Lydia gets her precious girls back, making sure this time to truly strip them of any chance of escape, hiding behind words to make up for the errors she committed last time (empty promises, like protecting them from evil men and making sure they are never alone). 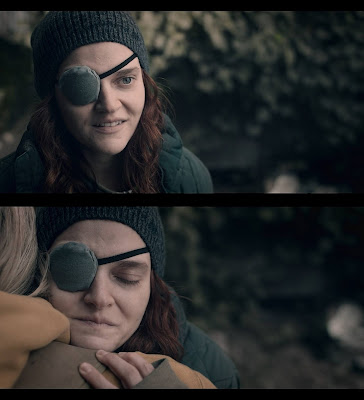 The issue of loneliness brings us back to Janine and June, who are living with the non-Mayday rebels in Chicago. Janine has begun to sleep with Steven, the resistance leader, and is cautioning June to keep quiet about her own ambitions at resistance in order to spare Steven’s feelings, since he’s been in charge for so long. June worries profoundly about Janine’s emotional safety, since she has a long history of getting attached to people who either die or betray her. It’s a reminder of how long June has looked after Janine, a relationship that has always been complicated and difficult, but has given both of them a sense of self. On a trip outside the camp, June is introduced to the idea of much more radical resistance fighters who actually kill soldiers rather than just live a life akin to normality (there’s music, bartering and games happening in Steven’s camp), and of course she immediately decides that she has to find the Nighthawks, who appear to be closer to Mayday. In a tear-filled goodbye, Janine explains to June that she wants to try to live this normal life, maybe have a child that she can raise here, in this approximation of a normal life – she rightly points out that everyone’s lives are short, so she might as well try, instead of continuing to run. June walks off – all by herself, just as Lydia promises her new girls that they never will be alone – and for a second there seems to be hope that Janine may get her happily-ever-for-now, that at the very least if something horrible befalls her we won’t know about it. But then, only moments later, after June has wondered the zombie-apocalypse streets of Chicago for a bit, there she is again, returned to June, to old patterns, to the safety of knowing what is ahead of her. Gilead made Handmaids walk in pairs so they would never be on their own, never unsupervised, but these two have looked after each other, have subverted that idea entirely.
But of course it doesn’t last long, because The Handmaid’s Tale has made whole seasons out of Janine’s suffering. In Gilead, Commander Lawrence assumes his seat at the table right after Nick proposes to reinvigorate their alliance (he has found out that June is in Chicago, and therefore decides to support a ceasefire that might help her). Except this man is starved to make his mark, to readjust Gilead unto a course he supports – pure power politics, stripped of any humanitarian concern. He reveals the full plan, which is to aerially bomb the ceasefire territories just before the beginning of the ceasefire, accepting that civilians will die, justified by maybe killing a few resistance fighters. It’s an absolutely morally heinous suggestion, one that reveals that there are no limits to Gilead’s wrongness – and it also means that Janine and June, just as they are walking the eerily quietly streets of Chicago, get caught up in the bombing.
There has been plenty of sudden and shocking trauma in this show – only a few days ago, the two Handmaids running behind June and Janine didn’t manage to cross the train tracks on time – but June waking up after the bombing, disoriented, in a radically changed landscape and with no sign of Janine, is one of the worst so far. She has finally lost every single person she was ever tasked to look after. Hannah, Nichole, the other Handmaids – all gone, and now Janine. And of course, it would be right this moment that an aid worker appears in front of her in the dust – and it’s Moira.
Random notes:
I choose to believe that Janine is JUST FINE, thank you very much.
Nick: If she was near the border I’d know about it.
Commander Lawrence: Oh that’s sweet. Would your heart glow or something?
This episode celebrates Janine and June, and some of the greatest moments are small, like when June decides to trade both of their robes for a hat Janine really likes. The show has changed its idea of Janine a few times (along with recognising how talented Madeline Brewer is), but in this episode, she is heartbreaking.
“Let’s fix this country. Let’s make things great again.”
at 10:22