The Handmaid’s Tale - I won’t let anything happen to you. 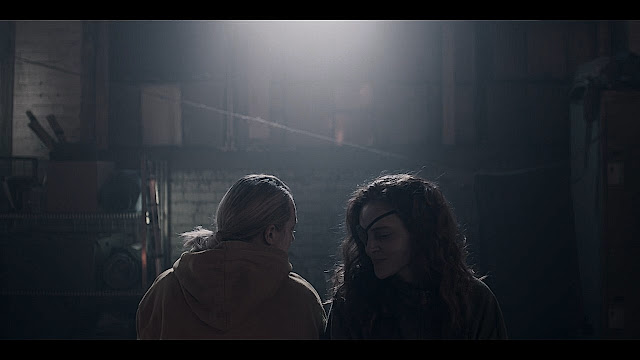 I’ll be thinking about June’s promise to Janine a lot, which she gives her as they are riding inside a milk transport towards Chicago, where June thinks they will find Mayday. It’s an almost cynical statement, considering the things that have already happened to Janine – most obviously, the fact that she is wearing an eyepatch, but also the less visible wounds. Janine has been spending the last few seasons suffering, and as much as this season so far has focused on June’s radicalisation, or the beginnings of June comprehending herself as part of a bigger, organised resistance to Gilead, Janine’s story has been about recovery. As much as June is deeply traumatised by the fact that her betrayal has directly led to the death of the other escaped Handmaids, the loss is even worse for Janine, who has thrived in this group, who has made true friends for the first time, and had something akin to a normal life when they were living on the farm together. So, when June admits to her that she has betrayed them, and then insists that Janine would have done the same, had it been her son, Janine refused to agree. 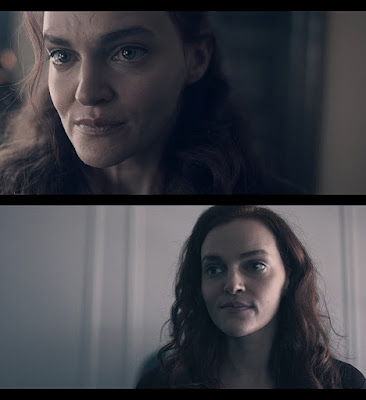 Janine’s refusal to agree with June is the triumph in this episode. Their dynamic is toxic, because June has never taken Janine seriously, has always considered her a burden at best. Janine likens it being treated like a mushroom – kept in the dark, fed shit – by someone who herself only has a vague outline of a plan, but is so convinced of her own rightfulness that she doesn’t allow disagreement. It’s a worthy exercise to think about what Handmaid’s Tale would look like if any of these other women were at the centre of the story, not June, how this would unfold differently.

June wants to see Gilead burn. Janine wants a life in which she is save, and loved. It fits in with what we see of her before – a rare grace, to once again travel back to a time before Gilead became fully Gilead, to a time that resembles our own now, in which Janine is unwantedly pregnant and seeks an abortion, only to find herself in a fake, Christian clinic that lies to her and tries to change her mind. The argument the worker there makes become ridiculous in the face of the fact that Janine already is a great mother – to her son, Caleb – that she is making an informed choice about her own body. It’s such a hard realisation when she sees that she’s been cheated, because it took so much for her to change her shifts, to even be able to attend the appointment. When she, at the end of the episode, is seen by a real doctor – a good one, who says, straight away, that the only thing that matters is that she has made her choice, that it is none of her business and not her job to change her mind – it’s a relief, and exactly the relief that Gilead is coming for. 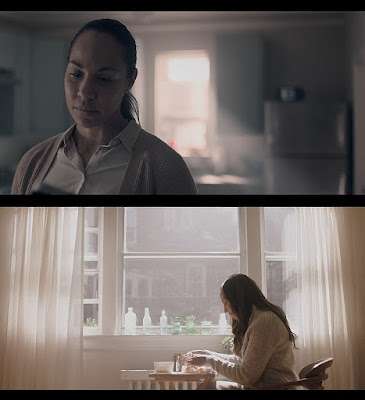 Gilead, which is a cult that has become a state. A cult that indoctrinates. In the most interesting moments this episode, we follow Rita, who still feels at odds with Canada, and wonder what her interior self looks like. Serena asks to see her, and she does, and is treated exactly as she was in the Waterford household – like precious and appreciated property. She still calls Serena “mam”, and Serena uses her own pregnancy like a weapon against her because she knows how much she values children. For a moment we are fooled and think that Rita is, too, until Mark visits her and reveals that Serena wants her to be a witness in her defence, to claim that all of her evil deeds were forced upon her by her husband. And then Rita, quietly, reminds Mark that she was considered property, and without having to say the words, entirely refutes any idea that she would come to Serena’s aid. Instead she sees Fred, and reveals to him that Serena is pregnant with their son.

The thing that June forgets in all of this, in her righteous anger and her commendable intent to join the resistance against Gilead, is that apart from the coltishness of Gilead, normal people are still just as selfish and immoral as they have ever been. The train drives into an ambush, June and Janine emerge, and find themselves with a group of people that appear to live off skirmishes. The leader, instead of seeing them as refugees deserving of help and support, immediately reveals himself to be another villain, a man who sees no humanity in June and Janine and is ready to use their precarious situation as leverage. June has promised not to let anything happen to Janine, and she has a moment of realisation of what this will entail - what it means to have so much responsibility for another person, in light of how conventionally evil the man ready to rape a woman who has escaped slavery is. Of course these people aren’t Mayday, just regular people surviving on the edges of Gilead. It will take another journey for these two women to find what they are looking for.

In the back of my mind I’m kind of wondering how real Serena’s pregnancy is, if all of this is some kind of ploy to get something out of her (but then, so far, nothing has hinted that we are meant to believe Mark is capable of that). It just seems a little bit too unlikely, and too much of a coincidence.

I love the final moment Rita has in this episode, quietly enjoying sushi by herself in her own, sunlit apartment, making her own peace, finding her own place and meaning. The subtle performance that Amanda Brugel delivers is outstanding, keeping us guessing as to what Rita's motives are and what she will decide throughout.