The Handmaid’s Tale – There is no light here.

The Handmaid’s Tale: 4x03 The Crossing. 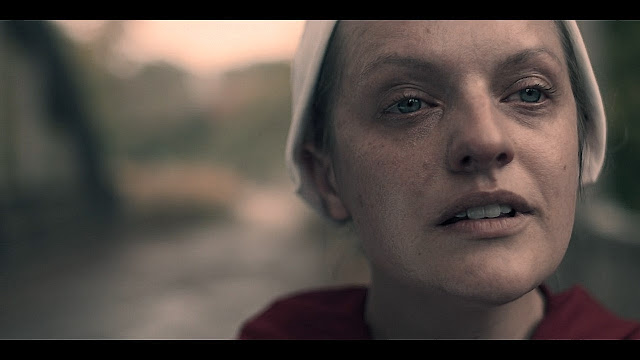 In a review, recently, someone made the point that there is a limit to the progress that June’s journey can make in each season, because The Handmaid’s Tale keeps getting renewed for more seasons. It’s a frustrating cycle, one that, within the logic of Gilead, leads to something that I am inclined to call “torture porn”, because the entire premise of this show is based on creating more and more pressure on June, which is achieved through physical and psychological violence. This is a particularly difficult premise if you find yourself caring about any of the other marginalised characters, such as the other Handmaids who are, after June’s capture, in hiding in the next safe house, because the way this show works is to take everything possible from June – which means that nobody in Gilead is safe (except Janine, who has suffered even more than June, whose suffering has created a different type of martyrdom for her).

I found this episode to be a breaking point of sorts, where it isn’t just hard to watch because of the level of violence portrayed, but because it just feeds into the cycle, and any escape will always remain temporary, and there will always be more things to lose, more people to sacrifice. It’s as Commander Lawrence says: even after years of suffering Gilead’s violence, June still thinks that there are limits. She thinks Hannah is safe because Gilead proports to exist to produce and protect children. But that is a lie, nothing but a façade, beyond which lies the true reason for Gilead’s existence: a group of entitled, privileged men hanging on for dear life to their power, which is slipping through their fingers. These men care nothing for the children that June has saved, they care that the fact that she has managed to trick the system reflects poorly on their own grasp on power. After being captured, June is being tortured in some kind of high-security prison facility by a man who clearly cherishes torturing women, and is trained in what has been, since the turn of the century, termed “advanced interrogation techniques”. They waterboard her, they threaten to remove fingernails, she lies to them, they retaliate by taking her and two other Handmaids up on the roof of the building, and throwing the other two off, to show June the consequences of her actions. Commander Lawrence accused June of being transactionary, and she has always had to be, but her resistance to Gilead is based on protecting women from harm – and now Gilead demonstrates to her that her very resistance causes harm. It’s a trolley problem posed by exactly the kind of people that would rely on trolley problems to make a point about ethics, a problem that is inherently so reduced to the bones that nobody ever asks how the people end up on the tracks in the first place, or why there is no break.

This episode reminded me of Baru Cormorant, even though I think that Seth Dickinson’s novels about colonial resistance and the cost of meaningfully plotting the demise of a seemingly all-powerful regime is a whole lot better and considered than anything The Handmaid’s Tale will achieve in its soon five seasons of narrative. The trick of Baru’s Gilead is that she will never be quite sure if her actions are her own, or are somehow manufactured by the regime that has indoctrinated her. And with every person that Baru sacrifices for her ultimate goal of destroying what has bound her, she can justify further sacrifices, because if she did not continue on the journey of losing people for the greater cause, than what did those other people die for that she loved so much?

June is on a similar course, but Gilead not being the kind of regime that values the lives of children after all, and Nick scheming with Commander Lawrence to save her life, know that she is vulnerable. They bring out Hannah, in a horrifying transparent room, and June doesn’t just learn that she is incapable of sacrificing her own child to the cause, but also that Hannah now, years later, is afraid of her – not of Gilead, because Gilead is so deep within her that it has become the only reality she can comprehend. Hannah is now like those children that Luke and Moira and Emily are attempting to place with their biological families, while acknowledging that their grief for their old lives in Gilead is real, and needs to be addressed. 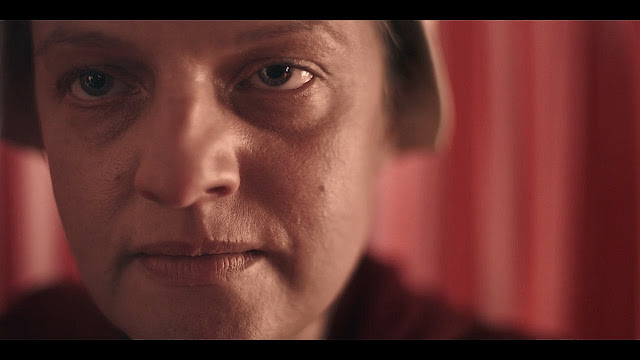 So June sells out the Handmaids. She does it after telling Aunt Lydia to her face that all of her claims of protecting her girls, of creating a safe world for them, were lies, that she has only sent them off to be violated and raped. It shakes Lydia to the core because Gilead is also so deep within her bones that ever admitting that its ideology is wrong and hurting women would destroy her. The other Handmaids, who didn’t really want to fight, who for the most part only wanted to cross the border to safety, are found by the Gilead security forces, and rearrested.

June asks Lydia to finally kill her, but Lydia responds that none of their valuable bodies can be lost, that instead of dying, they will be taken to a breeding colony: They will work in the fields, and their Commanders and Wives will be shipped in for the ritual, again and again. It’s the eloquent continuation of Gilead’s ideology, where it has always been so very unfortunate that women have a mind of their own. But before any of that can happen, Gilead for no reason at all except because it is convenient for this endless story of escape and recapture sends them all off in one van, with nothing but a driver and Aunt Lydia to look after them, as if breaking June that once should have broken them all for good. But it hasn’t, and instead, quietly, with nothing but looks, they plot an escape. A train approaches the tracks, the car stops, the driver leaves the vehicle, and June overpowers Aunt Lydia, telling the other girls to cross the tracks. Then she considers killing Lydia, which means that they lose just enough time for the driver to realise what has happened. We follow June as she runs, as behind her, two of the girls are shot, as she and Janine just cross the tracks to the sounds of Radiohead’s Street Spirit (Fade Out), as the train hits the two Handmaids behind them just as they are about to cross. Janine grieves instantly, and June needs to drag her away from the women she has shared her life with the last few months, whose lives were such easy sacrifices for The Handmaid’s Tale.

None of this is to say that the emotional impact of the show doesn’t exist, but something about these women got to me this episode – about the intense focus on their faces before their death, their quiet resolve to run to safety and freedom, and the cheap way in which that was wrenched away from them, just before it was achieved. Maybe I’m just tired of this.

Fucking Nick. And I won’t even get started on the ridiculousness, the stupidity, of the bridge scene, of thinking that this scene was necessary or fit with anything. Nick is a greater villain in this show than at this stage Fred and Serena are, because he thinks that his love justifies his means, justifies taking the lives of other women, because all it does is corrupt.