Y: The Last Man – He makes this whole building vulnerable. 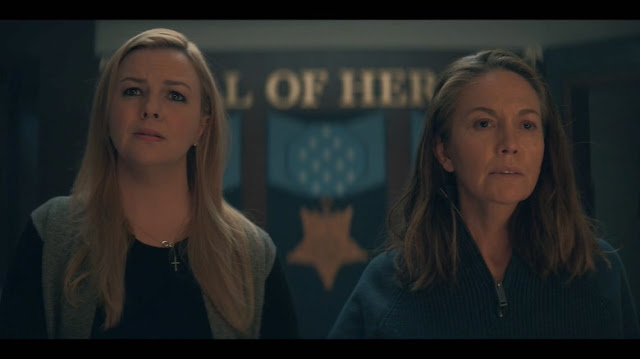 For the first time since this show started, an episode focuses on just two storylines, which I think is a good thing, as it gives the characters room to breathe and develop. The minor storyline is Nora (Marin Ireland, who has been great at showing how stoic yet increasingly desperate her character is), returning to a house she shared with other grieving mothers after being turned away from the White House, and being told almost instantly that the others are leaving, and do not have the resources (time or food) to take her and her daughter with them. Left with no food, they return to their home, where Nora’s husband and son are wrapped into blankets in the garden with crows waiting for a meal. Her daughter injures her leg badly, but insists that they cannot leave their dead behind unburied. Nora makes an attempt to bury her loved ones in the backyard but barely makes a dent, and when she looks up, she isn’t just surrounded by crows, but has a literal vulture watching her progress. It’s a quiet moment of realisation that this world has radically changed, and it’s a great moment in an episode filled with unburied bodies in a world where there aren’t any resources to give them the kind of last rites that society would have before the great catastrophe. Nora leaves them there and drives off – and I wonder where she will go now, and what it means for her that most of her qualifications and talents lie in a field that the President thinks aren’t relevant anymore (I think she is wrong on that account, but we will see).

The substantive part of Neil takes place inside the White House, after Yorick’s rescue. Yorick is now a ticking time bomb, with 5,000 women who have lost loved ones in the building and protestors outside falling prey to increasingly crazy conspiracy theories. President Brown doesn’t seem to fully grasp how dangerous Yorick’s presence truly is, and is just glad to have him back and close – but Agent 355/Sarah knows, and spends almost the entire episode finding a way to deal with this threat to the woman she has sworn fealty to. It goes awry almost immediately, when Ampersand escapes the President’s room and Yorick follows him through the hallways of the White House, where the worst possible person catches a glimpse of him. Marla – who is still haunting the building, grieving – follows him, and Sarah narrowly prevents her from confirming that there is indeed a man in the building, and it is the President’s son. They conveniently construct a narrative where Marla is too addled to give a true account of her perceptions, but they forget what an apt political player her daughter Kim is, and how desperate she is to exert influence in a regime that she considers illegitimate, and not representative of her father’s and her own values.

While Sarah tries to find a way to extract Yorick from the place he is putting in danger, Jennifer is busy finding a nuclear physicist or engineer to restore power. And it’s interesting to see how their lack of resources – time, personnel – creates a void into which Sarah, with all of her pragmatism and ability, steps so capably. From what we know of her, she is an operative, but she goes way beyond that in this episode, going through files of renowned geneticists to find one that can work on Yorick’s miracle. And she finds the best one among the discarded pile, a woman who tried to get funding from the Saudis, whom the aides discounted instantly but who she points out is the most qualified, the most dedicated, and therefore the best candidate. It’s a standoff between politics and the pragmatism that the situation requires, and it’s important to note that Sarah wins that debate, because Jennifer doesn’t really have an option not to have her win it.

The other shocking development is that Regina Oliver, believed to have died in Israel, awakes from a coma in a field hospital. Regina Oliver was next in the line of succession, and even after brain surgery, and even after finding out that every mammal with a Y chromosome has died, her first thought isn’t about the people she has lost, but about the fact that this makes her the President of the United States. It’s not a good sign, considering that Yorick, a few scenes earlier, has summarized her politics as “anti-immigrant, anti-government, anti-vaxx”. This is a woman who wants the power that this weird monarchal quirk of American politics legally grants her, and instantly, when President Brown and her team find out about it, they realize the danger of allowing this woman to step up into the situation they are barely managing.

I think it’s interesting in that moment, while some of Jennifer’s team theorise about whether a traumatic brain injury legally makes Oliver unfit for office, that Sarah’s allegiance doesn’t change. She has told Jennifer that her organisation takes its orders from the President, so it should lie with whoever is the President, legally – but I think she has made her choice regardless, and identified Jennifer as the person most qualified for the job, and therefore deserving of her service. Presumably there are also ways in which Jennifer could lose that trust and devotion.

Kim spends the whole episode scheming on the sidelines, making it clear how dangerous a political player she is. She speaks to the remaining wives (but finds little support initially from people who claim to have no political ambition, unlike her), she furiously exploits her connection to the secret service agents for information, and the only error she makes is approaching Sarah, trying to get her to her side now that she knows how close to the inner circle she is. Sarah knows she is a serious threat, especially with the spectre of Oliver, who represents all the hideous politics that Kim supports. It’s the combination of Kim’s threat and Yorick’s presence that drive Sarah’s plan to get Yorick out of the White House, and in the final moments of the episode, when Kim approaches Jennifer in front of the memorial and eulogises about the men they have lost, to come to a conclusion that loss is quantifiable as lesser and greater, and then makes a direct threat about her mother recognising Yorick in the hallways, she is proven right in her concern. 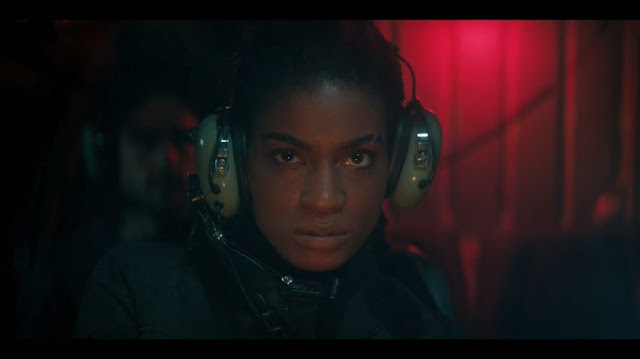 How far Sarah would go to fulfil her mission of protecting Yorick and the President is made clear when she sets up the two pilots who flew Yorick to the White House to accompany them on a separate helicopter to Harvard – as Yorick watches on in horror, their helicopter explodes and crashes, and there can be no doubt in anyone’s mind that this is Sarah’s work. I didn’t even expect these two to make it into this episode, and I think Sarah was trying to figure out whether she could trust them, and decided in the end that it was too dangerous to leave them alive. It does feel a bit harsh that she handed out those medals right before killing them. President Brown convinces a vital nuclear engineer she needs to return to work by saying that it is women like her, who have often found themselves alone in their career surrounded by men, who will be essential for survival in the future, not politicians like her, but it is becoming increasingly obvious that information control is just as essential for survival.

As mentioned before, the reason why I started watching this show was Olivia Thirlby (Hero’s not in this episode at all), but I think Ashley Romans has been the outstanding find here.

The scene with the crashing helicopter is set up perfectly by Sarah’s anecdote about Russia: after the event, the Russians pretended that the male leadership was still alive, but the public decided it wanted proof and stormed the seat of government, and now all contact is lost. She knows exactly what’s at stake here.

The episode directly addresses one of the biggest questions and inconsistencies – why are there so many bodies still around, months later – with Jennifer pointing out that they are dealing with survival, with very pertinent questions of nuclear power plants and water and food supply. I still think they could have probably done a bit better than just leave dead bodies at their desks and seal off rooms – the stench alone must be unbearable, and the risk of serious disease is great. I think maybe the show needed dead bodies for atmosphere in this episode and disregarded that it doesn’t make a whole lot of sense, especially considering how humans are made to respond violently, physically and emotionally, to dead bodies.

I demoted Nora to an aide in the last recap, she is of course the former President’s press adviser. It’s difficult to be entirely sure what each of the remaining staff members were before the catastrophe.

The other thing I’ve previously missed is that Ampersand is a male monkey, and should therefore be dead like the other Y chromosome-having mammals – it’s fair to assume that his survival is connected to Yorick’s, and, as Jennifer said, “he bites”. Let’s assume Yorick’s has a fair share of Ampersand bites, and that Ampersand was a lab monkey.

Kim calls the sole Republican who is working with President Brown “not a real Republican” because she in pro-choice, which gives you a sense of what’s at stake here. I wonder how close this story will get to the moment in Battlestar Galactica when President Roslin (I think, by the way, that Roslin would deserve a reevaluation in the world of 2021) decided that women’s bodily autonomy was trumped by the survival of humanity (and of course, I am sure we will return to the "how we survive is just as important as survival itself" theme).

“We found plenty of men, none with a Y chromosome” is such a great little line in there, good writing.

Is it becoming a running joke how little Hero’s family cares for her? Yorick mentions that he went to her apartment but it was already raided, and nobody brings up the idea of continuing to look for her, while Yorick spends precious time pleading for them to track down Beth in Ohio. He also lies about their engagement. NOT JUST A DEAD CLOWN, also theatre’s most famous skull, I guess.