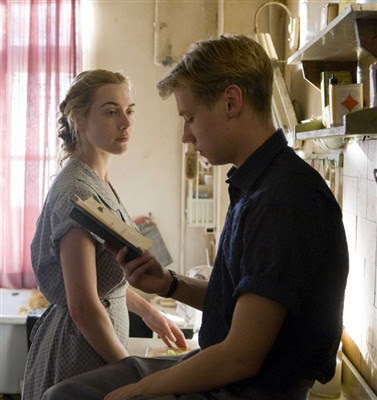 This was one of the novels on the required reading list for graduating in German - and it was one of the few novels that I felt entirely justified to dislike on that list. It would be easier to mistake it for complex, when the only thing complex about it is the maze of its faults. There is the most stunning basic assumption of it: that a woman would be more ashamed to be illiterate than to have participated in the murder of hundreds of people - and the fact that this plays out to be a voyeuristic experience, since it is a woman seducing a younger man rather than the other way round.
But don't get me wrong: the basic fault of the movie would be chosing this particular work of art as its playground, but nevertheless, the director and the acting are amazing. If anything, the faults of the novel become more obvious because Kate Winslet sticks so closely to the original material and with her acting talent, breathes a very odd and frightening kind of live into the character of Hannah Schmitz, while the young Michael Berg gets to live the dream of so many other teenage boys: get seduced by an older and more experienced woman.
The novel fails to deliver answers, and pride itself on this: is Hannah ever realizing the amount of her guilt, or does she still believe her only fault was following her strict commands in fulfilling her job (the novel argues that, since she can't read, being an SS-warden is the one thing that gives her meaning, so she follows that without ever questioning).
Watching the movie with some friends who had also been made to read the novel, we judged it by how much it met our few vivid memories: we expected it to deliver Hannah's apartment, with the bathtub in the kitchen and all. We remembered the first scene, when 15-year-old Michael throws up on the street and is picked up by this woman who, from the first time she enters the story, is both brutally motherly and wardenlike. Then there was something vague about a tramway and the whole trial, but our memories were not very clear on the details.
On all these accounts, the movie delivered. If nothing else, it is true to its original material, offering the best possible performances. As the novel was, the movie concerns itself with the self-discovery of the young boy, growing up to be a student of law and finally a lawyer, while Hannah always remains oddly foreign, far away, as she leaves the story and enters it once again. There is a brutal break in the middle of the movie, as there was in the novel, when the story turned from being about the first sexual experiences of a teenager to dealing with the horrible atrocities happening during the Third Reich - a break that is as awkward and unsettling as it was in Schlink's novel. Michael, who has not yet gotten over his first big love (as is explained by the fact that he does not immediately sleep with fellow student Marthe, played by Karoline Herfurth, once again wasted on a small role as in "The Perfume"), sees her again in a war-crimes-trial in the Sixties, as an aspiring lawyer, under the supervision of a Jewish law professor, who explains that the law is "narrow" and concerns itself with what was legal at a certain point of time, not with what was morally right.
At this point, there is the sudden moment when "The Reader" turns into a murder-mystery, when Michael finally realized Hannah's big secret (she can't write or read - SPOILER!!! - , which is why he had to read to her, duh), and also that this essential piece of information might limit her sentence. Naturally, he decides against sharing the information with the judge, taking into account that apparantly, she would rather accept a life sentence than sharing this shameful fact about her life (one of the many examples where the very premise of the source material turns into a burden).
After so many years of having this stored in the back of my mind, I believe I even get what the original intention was - drawing a parallel between how the young man was abused and how the KZ-prisoners must have felt when Hannah asked them to read to them, and then sent them away to be killed. But this parallel is the unforgivable fault that Schlink makes. The few instances when those are allowed to speak who actually went through to horrors of Auschwitz, the time given to them is too small. The focus is clearly on the life of the young man, finally growing up to be Ralph Fiennes, unable to stay in a relationship and apparantly deeply wounded by what happened in his youth.
Following this path, the movie concludes when Hannah dies, and Michael is finally able to resume with his life, sharing the facts for the first time with his daughter. He does actually achieve what the Holocaust surviver (played by Lena Olin) told him was impossible: catharsis. But why his story in this context would have any relevance at all is not answered, and thusly, the talents of all these fine actors are wasted on a deeply spoiled story, lacking all the bravery necessary to deal with such important topics as guilt, duty, morals and individual decisionmaking in a dictatorship.
2o08, Regie: Stephen Daldry, with Kate Winslet, David Kross, Ralph Fiennes, Susanne Lothar, Hannah Herzsprung, Bruno Ganz, Karoline Herfurth, Burghardt Klaußner, Lena Olin, Alexandra Maria Lara.
at 06:03