Popular - Let the record show: this is a war between inner and outer beauty. 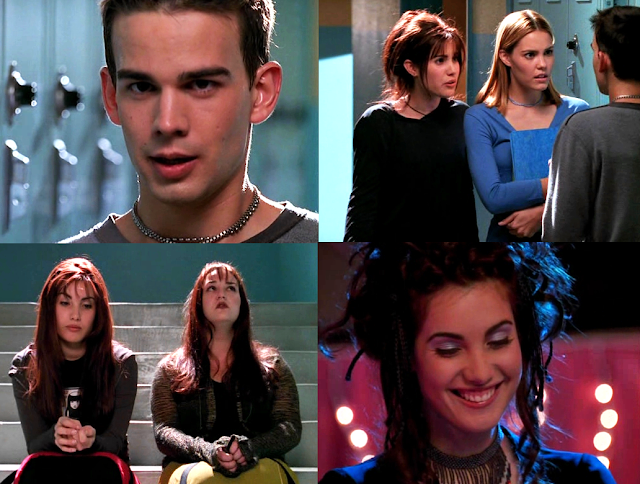 It’s Sadie Hawkins time, a time to remember that everybody suffers from anxiety and low self-esteem. Recently boyfriend-less Brooke daydreams about a game show in which she must decide between Josh, random new addition to the cast Stonecold and Harrison – who, surprisingly, wins, at least in her head, by promising that he is more interested in the contents of her mind than kissage. She decides to “take looks out of the equation”. Meanwhile, everybody else doesn’t: Sam stares longingly at Josh but fears that he “probably likes big breasts”, and Carmen tries to devise a plan to ask out Josh. Josh, object of lust, doesn’t really feel the love though: he is concerned about weight gain and convinces himself that the one thing standing between him and a reunion with Brooke is a couple of pounds that he will quickly rid with Sugar’s infallible “Wrap and Sweat System”.
Lily sees the entire school obsessing over ridiculous beauty standards (symbolized in the Glamazons’ logo) and decides to fight it with her own little project, because “The patriarchy wants us to keep our mind busy thinking about our body, but we can reclaim our power”. Meanwhile, Nicole, Poppy and Mary Cherry fall under the spell of a talking scale that commands them to lose more weight, and they decide to fight over Stonecold via competition: whoever loses most weight gets to ask him out.
There are some good moments in this episode too: Brooke, motivated by her decision not to let looks enter into the equation, has a beautiful moment with Harrison. They discuss Salinger (she is reading Franny and Zooey for an essay) and he argues that Holden Caulfield is “a better teenage symbol of America gone awry.”

Harrison: I feel like Holden, you know, searching. Slightly tortured. Okay, that’s a little bit too much information.
Brooke: No, actually I think that we all feel like Holden.
Harrison: If I’m not mistaken, Holden was also horrified and wanted to crawl into a hole and die when his mom picked him up from school.
Brooke: Harrison, do you want to go to the dance with me on Friday?
Harrison: Ok.

This is, of course, what Harrison has been dreaming of for years, and is so essential to his well-being that he completely forgets that Sam has asked him out previously, in order to make both of their lives less miserable.
While everybody is caught in their own personal hell of self-doubt and unhappiness, Nicole and Lily start a grander war: Nicole asks Lily to prove that she’s “managed to escape the media’s influence”, so Lily asks out Emory to the dance, and Nicole will try to turn April into a woman, proving “that happiness is entirely related to façade”. If Lily wins, the Glamazons logo will be changed “to reflect the average woman’s dumpy proportions”.
Carmen asks Sam to help her ask out Josh, Cyrano de Bergerac-style, and Sam composes a beautiful sentence about Josh’s inner values (which he probably wouldn’t appreciate that much considering he is currently so very worried about the state of his abs), but later, when Sam painfully realizes that Harrison has a date, and has completely forgotten that he was supposed to go with her, she asks Josh out herself, betraying Carmen in the process. Both Sam and Brooke take their respective choices for the dance as personal insults.

Sam: Why Harrison of all people. Could it be cause, I don’t know, he belongs to me, he’s been my best friend for years?
Brooke: Oh, you know what, I guess I missed that luggage tag, I didn’t see the S branded on his ass.
Sam: Brooke while you’re moving your pawns around your chess board, you should remember that Harrison has real feelings for you.
Brooke: I am the one doing the right thing here, Sam, not the superficial thing like you. Harrison possesses the qualities I  should be looking for. He’s sweet, and he’s literate and he doesn’t spend more time on his hair than I do. What I don’t understand is why you’re going with a guy that you have absolutely no feelings for. A guy that you’ve always considered to be a dumb jock.
Sam: Who says that I don’t have feelings for Josh that are real?
Brooke: Do you? Good for you, Sam, for going for it. You sneak into my closet, and you wear my clothes, so why shouldn’t you go for all my other hand-me-downs?
Sam: You see? You still like him. You’re worried that you’ve made a mistake and now you can’t handle the fact that he’s going with me to the dance! Brooke, you’re so transparent.
Brooke: You know what? Fine, alright, just to prove to you, let’s all go together. We’ll do some fun slamming Emory Dick hot tub action.
Sam: Fine.
Brooke: Fine.
Sam: Good. Done.
Brooke: Whatever.
Sam: I am really looking forward to going with Josh. Maybe he’s ready for someone more mature.
Brooke: Mature, you, please. You still wear training bras.
Sam: Well if that isn’t the pot calling the kettle flat.

*you will find a ~translation of this segment at the end of the review.

Sam is pissed because she is taking Harrison’s devotion to her for granted. Brooke is angry because she feels that Sam is taking just another thing away from her, and, even worse, she argues that she sees something in Josh that Brooke has completely missed.
And, to return to the beginning, they all hate their bodies: Josh and Harrison are lifting weights, no longer in friendship but in competition. Carmen is “sick of being the girl with the personality”. Sam buys an inflatable bra.
Finally, nobody has fun at the party. Harrison can’t move because he’s been lifting weights all week, Josh can’t dance because he’s dehydrated, Sam’s bra causes freak accidents, Lily has to admit that she is ashamed of Emory. They all spend a horrible evening, and it falls to principal Hall to question them. Brooke explains that “we do these things because we all just wanna feel loved”. I think it’s fair to say that nobody feels particularly loved and cherished at the dance though – but maybe they’ve learned a lesson. Also, the “kindler, gentler Glamazon” will now weigh 135 pounds, but Nicole ain’t budging on the cup size.

So everyone’s into Josh now?

Here’s how my senior prom went: those who had boy/girlfriends, took them. Those who didn’t didn’t. It wasn’t an issue. I played cards and made fun of drunk people. Also, the legal drinking age here is sixteen.

Harrison does the math: “Josh’s out of the picture, and three guys are out of the closet…”

I crown Emory the subtext king: making fun of Harrison’s obsession with Josh, he remarks “The teenage years are indeed a time of exploration, of questioning”. Harrison replies that he doesn’t wanna do him, he wants to be him. IT’S A FINE LINE, MATE.

April: Hello Harrison John. Though you are not the dream boy I have bondage fantasies about, that would the hard-bodied Stonecold, you would be an adequate setting for the fiery ruby that is April Tuna.

Harrison’s and Brooke’s conversation about Salinger mostly made me want to draw a graph of how much I prefer Franny and Zooey to A Catcher in the Rye. It also contains a quote that fits perfectly here: “And the worst part is, if you go bohemian or something crazy like that, you're conforming just as much, only in a different way.”

Also, on that note: Lily’s project to fight the obsession with losing weight by telling people to gain weight is ALSO body policing. “EAT something. BE something”.

When the Glamazons all finish their little competition weighing the same….

Mary Cherry: THE STRONGEST LAXATIVE THE WORLD HAS EVER KNOWN. Only the pentagon and an elephant keeper at the national zoo know its secret formula.
Nicole: Is it safe? Not that it matters.

Sam: It’s like a cross between Jennifer Love Hewitt and a hooker and it was totally on sale.

It’s not really subtext when it’s that obvious:

Sam: I am jealous because you are going with Harrison. Not jealous of you, but of Harrison, who is a really good friend. Also, please remember that I have real feelings for you and the prospect of you going out with Harrison is emotionally painful to me.
Brooke: At least I decided to hide my obvious feelings for you by going out with someone who has read Salinger and doesn’t spend any time on his hair, while you are going with my former beard, which is just another very obvious way of showing how much you are into me. Are you wearing my clothes because they smell like me?
Sam: You are just angry because you have feelings for me and don’t want me to go to the dance with somebody else. Let’s overcome all this and just go to the dance together. We can let Emory, Lily, Harrison and Josh tag along. Also, I look forward to spending time with you in a hot tub.
Brooke: I do too.
Sam: Good.
Brooke: I am really happy that we are going to the dance together. Also, I have noticed your underwear.
Sam: I too have noticed your breasts.

Hello again! I found this episode really interesting because I had never heard of Sadie Hawkins. The idea of having a special day where girls can ask guys out is pretty cool, although as a feminist I find it sad that it has to exist at all.

Also, your translation of Sam & Brooke's conversation is hilarious! Although I personally have yet to read any sexual tension between them myself...

Regarding the idea of Sadie Hawkins: I find it curious that there seems to be (and again, I am judging from what I've seen portrayed on American television) an unwritten rule that guys have to ask out girls. I'd find it much more practical if people dating simply came to the conclusion of going with each other, and those not dating anyone going there alone, without any pressure attached to show up as a couple (the whole procedure is also horribly heteronormative, etc.)

I remember the subtext between Sam and Brooke becoming more obvious in the second season... but maybe it's just me. I distinctly remember reading an interview where someone from the show stated that it was intentional, but I can't find it now... and I always thought it was significant that Jamie Babbit (But I'm a Cheerleader) was a producer.