Reaction Post - I'm not here to investigate for you. 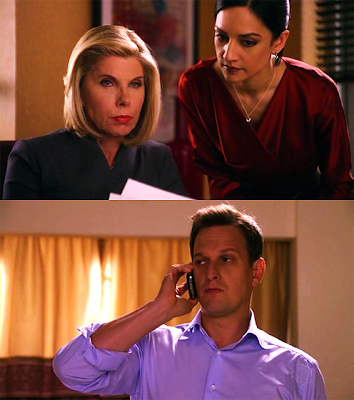 My government tortured me, and they won't even acknowledge that they did this to me. I don't want this to happen to anyone else. This isn't about the money.

This was certainly an unusually funny episode of The Good Wife, especially considering that it was all about a guy who was tortured by his own government and then prevented from seeking justice by the very system meant to protect his freedom and security. Even more frustratingly, the way in which Lockhart/Gardner (and especially Diane, who is fighting the case because it is close to her heart) eventually manage to win seems like the kind of unlikely fairytale that shows like CSI sometimes tell (where people are always magically killed somewhere with completely unique soil properties or rare insects or whatever). A mountain of redacted documents with barely any hope of discovering relevant information? Never mind, here's a potential witness with an unusually long name, and here, another whose surname is also an adjective (this reminded me of that one House episode when someone said to him, verbatim, your name seems familiar. Heh.) that was accidentally redacted in the document because computers, and stuff. Not that I'm complaining, because The Good Wife just isn't the dark, horrible place where the bad guys always win and the good guys have to cross over to the dark side, becoming what they despise most (that would be Damages and Breaking Bad). In The Good Wife, fortune sometimes favours the... good, or at least those with good intentions.
The things Alicia and Diane found themselves up against were unusually depressing, though. The piles of redacted documents weren't a big surprise, but Alicia also found herself as the liaison of a Treasury department monitor who tried to find proof that her client was, indeed, involved with terrorists, which put her in the impossible position of defending a client and collecting evidence against him (the titular executive order is a real thing, by the way - "We're in a strange new post-9/11 world. None of the rules apply."). But, never mind, here's the magical unicorn lawyer Elsbeth Tascioni (a brilliant Carrie Preston), who previously got Peter out of prison and while weird and technologically challenged (to the extent that maybe even Alicia might be able to help her, which is saying something), is a genius when it comes to fracking with authority.

Will: Okay, so you didn't ask Alicia to step outside.
Diane: I did, but then I thought better of it.
Will: O...kay.

Monitor: Is she bringing charges?
Elsbeth: No, she is much too nice for that. That's why she has me.