Reaction Post - Why does everybody always think that I want something? 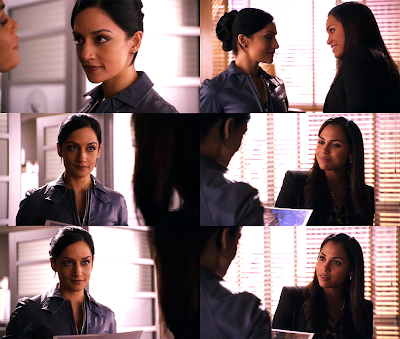 I have been conflicted about the balance that The Good Wife strikes between the week-by-week casework as seen by the different involved parties (now that Cary's point of view is becoming more central to the show) and the evolving relationships between the characters. Obviously, the two things are connected insofar as none of these characters seem to have much of a life outside their job, with the exception of Alicia's family - but in the past few episodes, the focus on the cases (and the strange shift towards portraying the investigative work more than what happens in the courtroom, which requires some level of suspension of disbelief) took too much attention away from the relationships that make this show work. Maybe this is all part of the build-up towards the inevitable 'boom' that will happen once all those collected secrets are revealed and things start falling apart (or in the case of Kalinda-Alicia, come together again?), but this has made some of these episodes frustrating. I get that this is a point that the show is trying to make: that Alicia lacks a person in her life to talk about her feelings, that even when characters connect, they still try hard to not appear too vulnerable because in the world of The Good Wife, remaining guarded is always part of the job description - but it also makes me not care about all those scenes in which nothing happens except case-of-the-week-solving, even more so now that we don't just get the Lockhart/Gardner cases (as viewed by both the firm and the State's Attorney office), but also Eli's work for the firm that isn't always about Peter and Alicia and apparently mostly there to make light of an episode that asked whether opposing the death penalty becomes more difficult when you're faced with a guy that doesn't inspire sympathy (a priest and Diane Lockhart think yes, but Alicia isn't so sure - "they were my daughter's age" is her gut-reaction and understandable, but I would have liked to see the question explored a bit more thoroughly, considering it was the one interesting aspect of the case).
I appreciated that Kalinda finally met Dana. Sometimes The Good Wife introduces characters and you kind of know that they would have pretty awesome chemistry with another character even before they are introduces to each other - Kalinda and Eli are a good example - but even though we've seen this dynamic before (because seriously, Dana isn't the first person in Kalinda's life to figure out that Kalinda can be elusive when it comes to sharing information), Monica Raymund and Archie Panjabi played off each other well enough to still make it seem fresh. Dana's strategy of doing exactly the same thing Kalinda does and not fooling herself into mistaking flirting for helpfulness ("Okay, Kalinda, I know how you work. You get what you want without giving back, and that's just not gonna happen here. You want your back scratched, I have an itch.") might have even succeeded if she hadn't asked for incriminating intel on Will, who is among the very, very few people Kalinda feels protective about.
The theme of the season, apart from the "secrets hurt" thing, is "are these feelings we're feeling real", I guess. Will is a new man, Alicia admits that they probably wouldn't even end their affair if it was the responsible, rational thing to do (now that Diane is glaring at them angrily whenever she sees them together through the many glass walls), and Kalinda... well, Kalinda is still a black box, really, but it's safe to assume that she isn't just using Cary any more and that things are complicated enough to have her be walked out on, which must be an entirely new experience.

Cary: Is that what Kalinda said?
Dana: You mean your girlfriend Kalinda?
Cary: No, I mean yours.
Dana: No, don't stop there, you're on a roll.
Cary: I saw you two, you looked more than friendly.
Dana: Really, and what does more than friendly look like.
Cary: Like, more than friendly.
Dana: Cary, listen to my words now okay, i have never said this before, but I am now going to say it for you. I am not a lesbian.
Cary: I know a lot of people weren't anything until they met Kalinda.
Dana: Is that why you have a thing for ethnic women?
Cary: What?
Dana: You're still pining for your lesbian?
Cary: Okay, now you're turning it, this isn't about me.
Dana: Figure out what you want, Cary, then we can talk.
Cary: I don't want her.

There would be a simple solution to this awesome triangle of mutual jealousy but something tells me that it won't happen on CBS any time soon. Cary gets extra points this episode for saying one of the truest things about Kalinda that can be said. Also there is at least one lie in this exchange, and wishing you didn't want someone doesn't make it so.

Is it significant that Kalinda changed her tone so completely from the "Go to hell Cary" only a few minutes earlier, and that between those two events, apart from a shoot-out and a surprising heroic moment of Cary, lies the conversation with Will in which she promises to help him? I don't know. Cary had enough doubts to get out of there as quickly as he could.

Kalinda: Is this coming from Peter Florrick?
Will: I think it is.
Kalinda: So it's about his wife?
Will: I don't know. I don't know anything anymore. I used to be able to read the political tea leaves, now I can barely tell why people say hello to me in the morning.
Kalinda: Then use me.
Will: I thought you were an island these days.
Kalinda: No man is an island.
[...]
Kalinda. Ask me for help.
Will: I feel like hugging you.
Kalinda: No, just ask for my help.

Favourite bits to come out of the "scandal":