Octavia Butler - The Parable of the Talents 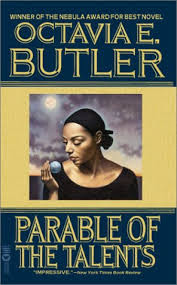 How quickly can a country descend into chaos and madness? How quickly can the things that we take for granted disappear? In Octavia E. Butler's The Parable of the Talents, a follow-up to The Parable of the Sower, US society has been in a steady decline for decades, struggling through economic hardship, poverty and violence, but that decline finally leads to the election of president Jarret, a religious fundamentalist. The novel builds an antagonism of sorts between the utopian community of the protagonist, Olamina, and the fundamentalist state that soon emerges after the election. This conflict is just one of the many examples in which the novel examines the relationship between the personal and the political, particulary with a heroine who is driven by an idea that she knows she needs to spread beyond the confines of her community, yet has to somehow balance that with caring for a family and trying to find a child who is taken from her only a few months after the birth.

The novel paints a dire, horrifying picture of a landscape riddled by violence. Misogynist, religious violence is not sanctioned by the state, but the ideology perpetrated by the President somehow justifies these terrorist groups that find a welcoming ground for their hatred of women. An ideology that subjugates women under the guise of traditional gender roles leads to horrible physical violence against women, to men who abuse their power and privilege to rape and pillage (very much like Margaret Atwood's The Handmaid's Tale, another necessary novel in 2017 and soon-to-be television show). Olamina's community is utterly destroyed, the families within in enslaved and torn apart by violence, and yet, she never gives up on the idea that Earthseed holds the future of humanity - mired down in violence and poverty, she dreams of a future where humanity reaches for the stars, colonises other planets. In a present where her daughter has been taken from her to be raised by a family that follows the religious extremist values of the President, Olamina struggles to rebuild her community and spread it through teachings throughout the world, and continue to look for her lost child. In the end - tragically, horrifyingly, only one of those goals is realised. Olamina and her daughter, who blames her for always putting Earthseed first, remain enstranged, but as an old women, she sees humanity take off towards the stars (but not even that is entirely unspoilt - the ship that is leaving towards the stars is named "Christopher Columbus", and therefore carries the historical seeds for all the colonial violence that has wrecked the planet it is leaving from).

Parable of the Talents is a fierce portrayal of two women, one carrying the seed of an idea that must realise itself, the other trying to comprehend how her mother could consider that seed more important than finding her daughter again. It is a novel about the conflict between the greater political, ideological struggle for the future of humanity and the connection between people and families, trying to find a balance between the two, not losing one for the other. At its core, it is an eloquent portrayal of a woman, a leader, who suffers through unimaginable horrors and yet never loses sight of her ideas and her radicalism, while the world she inhabits perpetrates violence against her which showcases what happens when someone elses violence and ideology comes out on top. The fact that Olamina suffers from hyperempathy, a side-effect of a drug that her mother was taking through her pregnancy, fits perfectly - a world lacking empathy, a world dominates by violence, becomes inherently too much for her, as she feels the pain of others, and yet she never stops trying to build a world where the resources that are still left are used to travel to the stars.
at 11:26