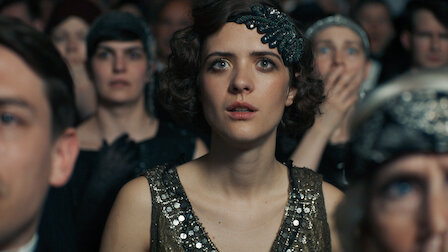 Towards truth, towards light.

Babylon Berlin steals your breath. It is expansive, immersive, it is unforgiving in portraying a whole society – that of Berlin in particular, and Germany as a whole, in the years before 1933 – hurtling towards darkness. The cast of characters is vast, and spans all segments of society, from the workers and unemployed trapped in the darkness and misery of inescapable poverty, to the joys and excesses of the queer party scene, the criminal underworld, to the scheming upper echelons of society thirsting for past glories. In each of its three seasons so far, the story is driven forward by following the criminal investigations of its two main characters – Gereon Rath (Volker Bruch), a transplant from Cologne, starting off as a traumatised WW1 veteran who is addicted to morphine and Charlotte Ritter (Liv Lisa Fries), a woman who seamlessly moves between making a living in an upper-class bordello and climbing the unlikely and reluctant ranks of the Berlin Police department. Between the two, Charlotte is transcendent, code-switching effortlessly between what her different social roles require of her, adjusting the tone of her voice, her outfits, her entire behavior as she moves from her family’s drab and cramped living quarters to the parties she frequents, to the seriousness of the male-dominated crime unit she so desperately wants to be part of. Gereon is an interloper, unfamiliar with the city he has moved to and the inner workings of the department he has joined.

The cases are intricate and involve everyone, from criminal to politician. It soon becomes obvious that the goal of the show is to reveal the workings of this society itself, the political structure, with the events of 1933 looming in the not-too-far distance. Within the partially corrupt police department, factions war over the future of the country, creating a situation that makes it impossible to remain a good person, a lesson Gereon learns early when he becomes a pawn in the game, being forced to cover up the sanctioned police murder of communists during a May 1 demonstration. It throws him into murky territory where he is already struggling, with the facts of his brother’s disappearance in the trenches and his now decades-old affair with his brother’s wife (played elusively and convincingly by Hannah Herzsprung). The perception of Berlin as a spiral that eats people up becomes stronger with each episode, leaving people dead on the concrete who are too trusting, or not quick enough to see the truth.

There are so many storylines that it is hard to capture everything. A young woman, a friend of Charlotte’s, also new to Berlin, finds herself seduced by self-proclaimed communists who trick her into aiding in the assassination of her boss, the police president. Babylon Berlin follows Greta’s (Leonie Benesch) path through the institutions, where a combination of her own guilt over the death of a child and her vulnerability exploited by Gottfriend Wendt (Benno Fuermann, more about his character later) leads her to hide relevant information that may exonerate her, and safe her from being executed. The show uses her story as a jumping-off point to showcase the slow but accelerating undermining of institutions and the state by the NSDAP, as the German Nationalist forces that oppose the Democratic state and are driven by rich industrialist as well as the decimated former military leadership of the country forge an alliance with what they amongst themselves call “Proles” – violent politically organized gangs with an anti-Semitic ideology that are too willing to do their bidding. Wendt, a former officer, comes to a point in the story where he sees that this tactic is more promising than the traditional approach that his co-conspirators want to take. This is how all the different sides of the story open up – the conspiracy of the army to illegally rebuild German military capacity, the rise of NSDAP members through the institutions and towards respectability, Gereon’s realization that his own police force is becoming complicit.

And in spite of the inevitability of the future, Babylon Berlin finds characters and moments of humour and joy – especially with Karl Markovics’s Samuel Katelbach, an exiled Viennese journalist who writes for a leftist newspaper that is in the crosshairs of the Nazis, a journalist who is working on a grand story about the illegal rebuilding of the military. He stands out not just for his accent (lost in the English translation, but obvious to a native speaker), but for the way that luck and human connection help him to navigate dangerous terrain to the point where he unwittingly becomes the centre of a counter-conspiracy against the military’s conspiracy that includes Gereon, a police-widow (a magical Fritzi Haberland) who is also his beloved landlady (and was, at one stage, Gereon’s landlady and one-night-stand), and the daughter of a military leader at the centre of the conspiracy who also happens to be a communist eager to reveal her father’s secrets (who is also in a sparring relationship with Wendt – Berlin seems like a village). Towards the end of the third season, Katelbach serves his Hungarian goulash and his Frittatensuppe as the widow Behnke reveals the microfilm containing photos of military documents. It’s the unlikeliest team of heroes, one that is historically even more unlikely to succeed, and yet it is difficult to resist the charm of the fantasy.

But I would argue that the heart of the story is Charlotte, who is stubborn in her attempts to be taken seriously by a police service that refuses to allow women into the major crime units, and yet has just as much observatory and detection capabilities as Gereon. She moves seamlessly, which makes her an asset – she knows everyone, and serves as a guide to all the different stratas of Berlin society, even while she takes care of her struggling family and her friends whenever they get into trouble (her attempts to save Greta are heartbreaking – and she never turns her face, even when it gets difficult). Charlotte repeatedly loses people she cares deeply about, and yet refuses to give up.

There is so much more – Gereon’s nephew’s seduction into the Hitler Youth (Katelbach diagnoses early on that he is “Politisch ein bisserl wacklig” – politically on shaky ground), industrialist son Alfred Nyssen’s obsession with the stock exchange, and his mania-induced correct prediction that it will come to a catastrophic crash in 1929 that he bets big on, the way the show often leans completely into surrealism, as it does with its depiction of psychoanalyst Anno Schmidt, who might or might not be Gereon’s lost brother. The show has gay characters in a limited time period where it appears to be permissible to be semi-openly gay, and free at least in the nightlife of Berlin’s club (again, the darkness is looming, and it is tragically looming the most for many of its central characters). It celebrates that night life, and art in general, especially in the third season, where the alliance between a German-Armenian crime syndicate and a lauded film director leads to a sound film that is screened at the end of the season, in celebration of its unlikely completion (since it got three of its main actresses killed) – a film that leaves its audience stunned, but is panned by a socialist journalist for being too escapist for the current times, distracting from what is actually important. In the second season, Brecht and Weill’s Threepenny Opera (whom nobody could accuse of every having written anything escapist) plays while an attempted political assassination takes place, and the cruelty of society depicted in the play mirrors the one that we see when the show follows its poorer characters home – into apartments that make them sick, without the ability to afford medical care, or any pathway out of the misery that isn’t crime or prostitution.

The third season ends hopefully with Gereon spoiling Wendt’s plot to make himself Chief of the Prussian police, but the signs of darker things ahead are everywhere, and inescapable. Children wearing swastika armbands train for war in the woods, military officers hire SA gangs to murder and intimate people, anti-Semitism is everywhere – it’s difficult to see how half of these characters will make it through the next ten years alive. In any case, you can't accuse the show of closing its eyes, instead it assumes the responsibility of the critical and independent journalist, digging in.