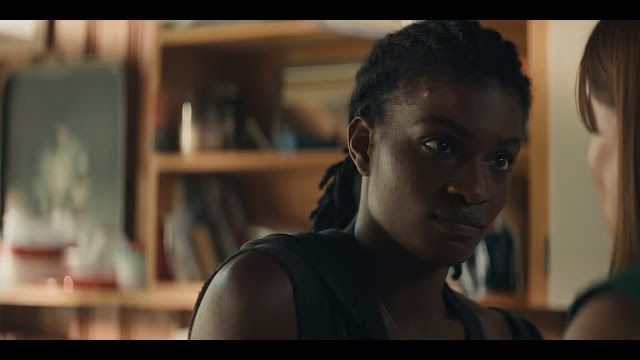 In the beginning of the episode, Yorick, Sarah and Allison discover that the community of Marrisville has a celebration every Tuesday to make up for the lost anniversaries and birthdays in prison:  with cake, with music, with booze. This community has food and water, it has electricity during a few hours of the day, but more than that, it has a cohesion built on something other than a common enemy and violence. It could be a home – or so Yorick thinks – but Sarah deeply mistrusts the peace and quiet. At one stage, Yorick advocates for their hosts, pointing out that the prison industrial complex and systemic racism mean that many of these people very likely were unjustly imprisoned and innocent (valid points, though also the kind of points someone who was never part of a justice movement would make after listening to like one podcast). He then makes a logical leap to argue that statistically, women are less likely to start shit – a hilarious statement that Peppers then continues to dismantle thoroughly.

How utterly wrong Yorick is with his statement becomes obvious when we see the Amazons on the move. They’ve identified a target, a museum/art installation in which women try to remember the men in their lives. It’s beautiful, in a way – the voices of recorded voice messages echoing through an industrial silo (“Hear them speak again”, “1,000,000 Man Hours”), clothes and accessories, a spoken word performance of memories – it’s a way of turning something casual, incidental, into something profound, and a very effective way to capture a collective grief. It also absolutely enrages Roxanne, whose ideology is now boiled down to hating men for wronging her, and wanting to stamp out any reminders of men. Nora has always been the more pragmatic, she did after all work for a President who allied with Regina Oliver (later, someone will mock her by pointing out she has questions about fluoride), and sees the raid as an opportunity to gather resources. Instead, the horde mindlessly destroys, spills water and food, rips tents apart. It’s a monster that Nora realises she can’t control, a monster driven solely by Roxanne’s crazy preaching (and Hero is right amongst them). If Nora is to wield this somehow to her own advantage, she has to find a way in, and she begins to make progress when the other women reveal to Hero that Roxanne has told them about her confession – which she surely thought Roxanne would keep to herself. Nora sees an opportunity, and makes up a story on the spot that is based on one of the recordings in the silo, the frustration of having done it all, children, career, husband, and yet wanting more. She then advises Hero to never tell Roxanne her secrets, because she doesn’t deserve them – but knowing Nora, it’s not a true connection being forged, it’s an attempt to drive a wedge between Roxanne and her disciples, to find a way for her to lead these women in a way that she thinks is more productive. The outcome of the raid is that Roxanne vows to track down each of these men who have allegedly been sighted, but then Nora speaks to one of the women who turns out to be the sister of someone that Sarah shot at the markets – someone who got a good look at Yorick, and managed to follow him all the way to Marrisville. When the woman reveals that Marrisville has electricity, is a habitable community that has everything the Amazons would need to settle down again, Nora’s ears prick up, and I guess we’re heading towards an ideological showdown in the final episode.

At the Pentagon, things are coming to a head as well. Regina and Kim have forged an alliance, and with the shocking story of Jennifer hiding the survival of her son and maybe ordering Sarah to kill the pilots (she didn’t, but that’s beside the point), they have managed to get the military leadership on their side, with plans of a coup on their way. At the same time, Beth’s group is planning to plan the Pentagon, using the information she has gathered during her visit as valuable intel. The timing of the two plans coincides perfectly: Just as the War Room gathers to confront Jennifer, and Jennifer is forced to reveal the rumours as true, a bomb goes off and everyone scrambles to get to a safe bunker, with the lines of responsibility blurred. Is Jennifer still President? Has this coup succeeded, and is Regina Oliver now responsible? Nobody is sure, and once the attackers overwhelm the secret service agents and have guns aimed at everyone, the situation descends into chaos precisely because there is no clear idea about who is President. Jennifer wants to take responsibility, because it is in her nature to do so – Regina wants to, because she is hungry for this power, because she thinks that the people at the barricades are on her side, are only after Jennifer’s head. It’s a terrible miscalculation, because Regina doesn’t realise that these attackers don’t fall into how she understands resistance. They are deeply disillusioned and likely were even before the Event, and Beth has fallen in with them after seeing her mother abandoned and dead, the victim of a health care system that was already broken before the apocalypse. These people don’t want a conspiracy theorist who doesn’t believe in science to be the President – they want to topple the entire system, and begin with a tabula rasa. One of them says explicitly – “This system has always been broken. We need to tear it down. Let the grass grow”. But Regina doesn’t have the capacity to analyse the situation for what it is, and pushes too hard, and one of the women shoots her point-blank.

And then everything descends into chaos. The military is storming the Pentagon, the protesters outside are coming through the barricades, shots are fired indiscriminately, while folders burn. It’s the end, and Jennifer realises that early on, that this is a point of no return. Beth cuts her restraints, and they are now stuck with each other, a woman who cannot show her face and another who has just found out that her boyfriend is still alive – and all of that, as the US government ends.

Sarah’s flashbacks as she grapples with whether to hold on to the tracking device are beginning to add up to the first half of Nikita/the first episode of La Femme Nikita: Her version of Michael began training her from childhood, culminating in a final proof of trust (we know that this would have been a killing) that profoundly traumatised her. Her concussion has triggered these traumatic memories, and she ends the episode by smashing the tracking device that would have led her to the woman who did this to her.

The emerging Sarah/Allison/Yorick triangle is very, very interesting. In this episode, Yorick and Sarah dance to TLC’s No Scrubs, with Allison looking on jealously – Sonia teases Sarah about liking Yorick (or maybe is trying to figure out if Sarah is going to claim him for herself, since she’s interested –  “He trusts you for some reason so don’t fuck that up.” she advises), and Allison makes a thinly veiled attempt at making Sarah jealous by going after one of the community members, which results in a very flirty (and obviously weird – this is Allison after all) scene in which they choose an outfit together.

Sonia’s retelling of how the community came to be is impactful. How the male guards died, and then the female guards locked them up, forgetting they were people – she hints at what happened once they managed to break free, why they are now living in the same houses that those guards likely inhabited, before. Let’s hope Marrisville is ready to face the Amazons.

Nora’s “don’t touch the fucking Corn Pops” made me LOL. There is a parallel here between Jennifer’s experience with Regina, and Nora’s with Roxanne – they both feel like they are “surrounded by children” incapable of realising what is at stake.

I have a lot of mixed feelings about Kim, but she has a lot of great moments in this episode: her sheer fury and grief over her mother which she of course channels right back into the conspiracy she’s been working on, her protectiveness of Christine that is mostly about the baby, the fact that she sees Yorick as the future of humanity, and is more angry than anything at Jennifer for putting a future with men in jeopardy. Also, she kills for the first time in this episode protecting Christine, and the two seem stuck with each other for now after the chaos of the Pentagon.