The Expanse – That’s what I’m here for. 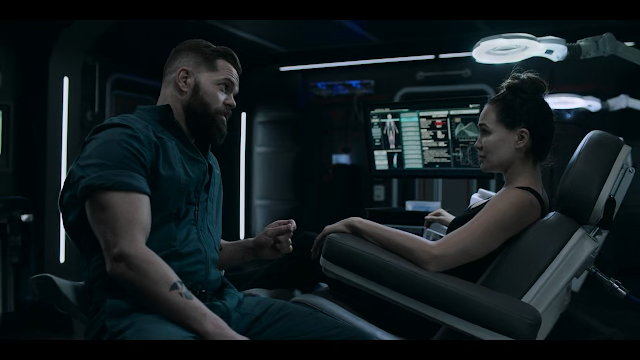 Azure Dragon has everything you could possibly want from an action-laden episode of The Expanse: A space chase between the Rocinante and the titular modded out rockhopper that guides the Free Navy’s asteroids towards Earth, and then a breathtaking battle on the Azure Dragon’s hull, featuring Bobbie (finally back on the Rocinante with her combat suit in tow, having it out with Amos over who has the bigger guns – it’s for sure Bobbie) and a cameo of Clarissa Mao’s implants, which she employs to save Bobbie’s arse after jumping in for Naomi, who can’t go through with another space jump after the traumatic experience last season. It’s a lot of action for this worn-down group of tired friends, directed in secret by Chrisjen, who doesn’t want the possibility of a publicly failed mission on her shoulders (but cares enough to send her personal hero Bobbie to help them). For sure she will claim the success as her own now, the prospect of sparing Earth from future attacks and knowing the locations of all the asteroids pointed at it.

The space battle is breathtaking, but it’s more important to ponder what it reveals: A tired, harrowed James Holden (he looks narrower, as if he’s haunted) who feels the burden of the battle, and knows that Naomi is battling her own demons, but isn’t ready to talk about them. He does finally welcome Clarissa to the crew – via a dressing-down, for not following orders, that leaves her in happy tears because she’s finally been accepted. And she has put the hard work in as well, and Amos appears to be as proud of her as he’s ever been of anything. 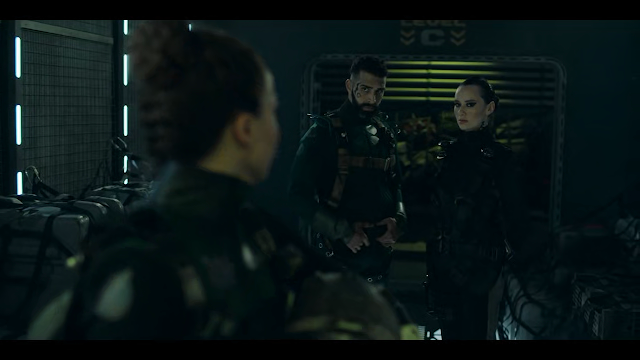 On the Tynan, Drummer’s salvage ship, the crew gets ready to hand off Michio to a Golden bough vessel, buying her safe passage to Ganymede, but the captain of that ship tells Drummer he can’t actually take her all the way there, because he’s had a fall-out with Marco. Drummer, hearing of the crew’s frustration about all the shit jobs and the meagre slim pickings they’re receiving, sees an opportunity to build an alliance – a very interesting one, considering that this captain knows the location of Marco’s secret stashes of goodies. It’s an interesting development especially in the light of Marco’s loss of the Azure Dragon (which he thinks is an opportunity, as it will draw UN ships away from Earth to trace down the asteroids), but for now, Marco is busier with the fall-out of Filip’s murder. As Marco’s son, he obviously doesn’t suffer any consequences, regardless of what the chatter in the crew might be, and he has a revealing conversation with his second-in-command about the different meanings of the word “love”, the fact that he needs Filip to become the man he wants him to be, without giving him any space until he arrives there. It’s everything Naomi could have predicted about Filip’s fate, his suffering, and it’s clear in this episode how traumatised he is by the death of his friend, as he barely composes himself to send his family a clipped and unemotional message that leaves out his feelings and responsibility. Filip is a ticking time bomb, and I’m not sure if Marco in his grandiosity is quite capable of seeing that.

An on Laconia, a picture emerges in another etiquette shown at the beginning of the episode. Cara brings back an injured bird analogue that dies before her parents can help her save it, and they painstakingly explain to her that the fauna and flora on Laconia is nothing like what they know, which is why they have to grow their own plants, and can’t make assumptions about the animals. Frustrated and sad, Cara decides to try and help the bird’s babies, but fails when her drone crashes, and then a – I guess dog-analogue – approaches, appears to try and seem nonthreatening, maybe friendly, but then scatters off into the bushes with the dead bird before Cara can bury it. In the background, in talks between her parents, we get hints about what’s happening on the planet: some kind of rift between the Civilian settlers and the military, and a communications blackout, presumably because these are the errand Martian ships who do not want anyone to know about the mutiny and the protomolecule. Weird stuff is happening.

Chrisjen (presumably successfully) guilts Monica into producing a series about Earthers affected by the asteroid strikes to show the human side of the suffering (Monica says it’s propaganda, Chrisjen counters that if they sway even a single Belter, it’s worth it, and could she really live with the guilt of not having prevented more suffering?). Monica prides herself on being an independent journalist, but she LOVES access, so it’s predictable how this will go.

Holden asks Bobbie if there have been reports about ships disappearing in transit through the ring gates, and she confirms-  playing right into his worries about that protomolecule sample that was stolen from Fred Johnson (it’s on Laconia in the books, but there’s no confirmation of that yet on the show).

In spite of the fact that it’s Clarissa Mao who saves the day in the end, it is awesome to see Bobbie back in action.

I do quite like how the little etiquettes at the beginning of each episode advance the Laconia plot, which the restrictions of only having one season left can probably only go so far (there isn’t time and space to see Duarte’s empire and scientific advances evolve into what it is in Leviathan Falls). I wonder how far we’ll get, and how weird things will be for Cara at the end of it.