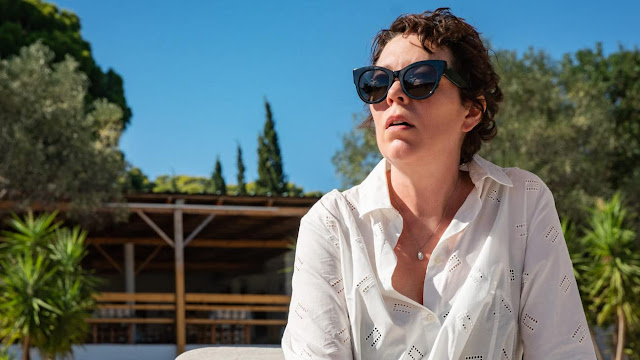 A recent essay in the Literary Hub, making the argument that Maggie Gyllenhaal’s adaptation of Elena Ferrante’s The Lost Daughter has all the makings of a horror film, made me think about how I felt while watching the film – it was less the literal (figurative) body horror of the doll that Leda steals from a child and then holds captive for a great part of the film, both the grossness of what lurks inside the doll and the way that the eventual discovery of her crime could escalate towards violence (the constant threat of the mob-father). In the current timeline in which Leda (Olivia Colman) attempts to have a holiday in Greece that is rudely interrupted by people who refuse her space and quiet in numerous way, who refuse to be courteous or respectful and transgress boundaries (the New Yorker who asks her to move from her beach chair so her family can spread out, the teenagers in the movie theatre who do not follow the social contract of cinema audiences). In the past, young mother Leda (Jessie Buckley, phenomenal) has a mirrored experience of her older self when she attempts to do academic work through the constant interruption of what mothering two young daughters requires of her – she needs a room of her own to work, but she can never, ever close the door in that cramped apartment, can never carve out the time to attain the deep focus that she needs. Throughout both timelines, the dominant feeling is one of dread – of something looming, something on the cusp of escalation. The music plays into this – I wonder what the film would feel like if it was more conventionally scored – but it is also the situation itself, both locations are prisons for Leda of sort. She cannot leave the domestic scene, she cannot leave the little Greece holiday town, her whole life mapped between the walls of the one-bedroom and the distance between the beach, the house, the restaurant in town. This is a feature of a horror film, presenting the character under threat as incapable of leaving, and it doesn’t really matter that the threat in this case is more mundane, not a monster or a slasher – the obligations of motherhood, the structure of a planned out holiday in a different country.

The brilliant thing about The Lost Daughter is that the film presents Leda in those two situations of her own making, and then we watch her carve out her own freedom within them. For a long time, it remains unclear what the break in her life is that the flashbacks work towards – did she lose her daughter when she was inattentive? Does the little girl that she sees in the present time who also overwhelms her parents remind her of a daughter she lost, struggling the same way that Dakota Johnson’s Nina does (in conversation, she calls having children a “crushing responsibility”)? That would be a more conventional story – instead, Leda escaped in the least socially acceptable possible way. One day, she simply left, after experiencing a temporary freedom of an affair with another academic, and the joys of being taken seriously for her research. These scenes are joyful, show her passionate and fulfilled in her work – and the conclusion she draws from the experience is that to preserve that joy, to preserve her work, she has to leave her family behind. And she did, for a few years, and when asked about what it was like to leave, she doesn’t give an expected response: instead she says that it was amazing. That is not a feeling that is permitted for a mother who has left her children, but to Leda, it was the only way out, and she appears to not feel any regret about it – if anything, she mourns the years of studying and writing that she missed. There is a similar sense of dread and confinement in Shiva Baby, which is set almost entirely during a wake. The inescapable confines are the house in which Danielle (Rachel Sennott) finds herself, trapped by the requirement to attend with people who spend the day investigating and questioning all of her life decisions (career prospects, romantic prospects, is she eating enough, or maybe too much?), while (because in a way, Shiva Baby is a black comedy of errors) all of her secrets threaten to come out. Her ex-girlfriend Maya (Molly Gordon) is there, and the man who is her financing her current life (Danny Deferrari), and his wife and young baby. While the music leaves constant unresolved tension in the air, Danielle simply cannot leave before the walls of her lies come crashing down – and as in The Lost Daughter, her excruciating experience is shared by the audience, who are trapped in discomfort and horror along with her. It is a claustrophobic experience – there aren’t enough rooms to escape confrontations or to avoid conflict, not enough breathing space to process any of the revelations or personal conflicts. Danielle has to confront her sugar daddy about the fact that he kept his wife and baby secret, while navigating the ire from wife, who puts the pieces together too quickly for her to escape the unpleasantness. She has to figure out what to do about the fact that she still has feelings for Maya, a relationship her parents frown upon and don’t comprehend, while being interrogated about everything that transpired since the two of them broke up. A quick stolen kiss outside only provides a temporary reprieve.

The Lost Daughter spans many years of Leda’s life, Shiva Baby only needs a few hours to unravel everything about Danielle’s, which ironically (and to great comedic effect) continues the confinement into the family van that drives too many people home, out of a misguided sense of helpfulness, when all these people want is be by themselves for a breather. 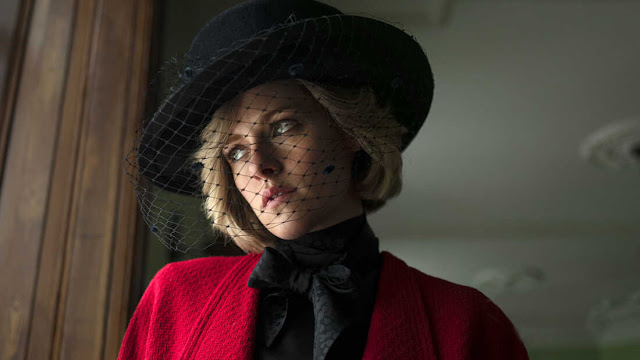 And then there’s Pablo Larraín’s Spencer, among the three maybe the more traditional horror films as the halls of the legendary Sandringham are haunted by other women who have fallen into disfavour – and what could be more horrifying than the history of the British monarchy, both in terms of individual suffering and the implied greater terror of a colonial Empire (is there a grander haunted house than the British monarchy? Or a better person to provide an eerie, unsettling score than Jonny Greenwood). Kristen Stewart’s Diana (her first line in the film is “where the fuck am I”, but Stewart deliberately swallows the “where”, so it could read as a question about her own identity instead) is trapped in the traditions of a family that wants her to act as furniture, with no individual impulses or needs, and any attempt at being a person is frowned upon as nontraditional. She arrives late, in her own car. She goes through the horrors of a weigh-in at the gates, to give her a sense of what is considered fun in this castle of horrors. These traditions function especially life-destroying in light of Diana’s eating disorder, the constant surveillance and forced publicity, never not being regarded, like a prison. Being constantly cold is considered character-building, and so the radiators are never properly turned on – all the wealth in the world, but none of it for personal comfort, while her haunted marriage (Camilla, looming) and her obligations to traditions play out, while she tries to protect her children, while Anne Boleyn wanders the halls, a historical victim that precedes her. The deep personal connection she has with Sally Hawkins’ Maggie gives her too much space, is too suspect, and so Maggie disappears.

In Spencer, the horror is the confinement of violent tradition that abhors individuality, and specifically the horror of being a woman in that confinement – and in the case of Spencer, it thrives on the contrast between the perceived luxury and grandiosity of royalty and the poverty of the life and joy that it translates to. The film is “A fable from a true tragedy”, but the fable is a horror film.