The Handmaid’s Tale – One day, there will be justice.

The Handmaid’s Tale: 5x06 Together. 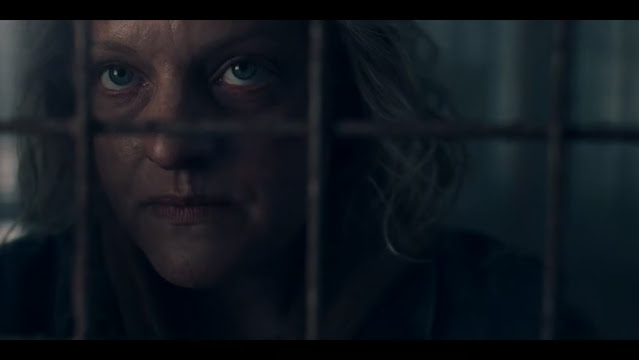 For the entirety of this season and ever since June managed to leave Gilead and Serena crossed the border after Fred’s funeral, we’ve been building up to this. June taking more and more risks, both for her daughter and for revenge. Serena not just seeing the bars on her cage, but feeling them get closer every day, as more and more freedoms are taken from her. It is a slow but clear escalation that has now reached its end point: June and Luke apprehended by masked men with unknown allegiances in the liminal lands between Gilead and Canada. Serena, expecting to be able to leave the house for her doctor’s appointments at least, being led up to the top floor of the Wheeler’s house to find a whole birthing suite, realising she will never ever again be truly allowed to leave.

June and Luke at least have each other, but they spend a good part of their shared confinement in separate cages talking about how June has been through this many times before, while Luke hasn’t. He tries to explain that he regrets he could never protect her from this, and she feels guilty for leading him to a place he never truly understood, couldn’t because you have to go through it to really see it. June thinks they can survive this, or maybe she just says it because she sees Luke’s hope disappear – he expects them both to be executed in Gilead.

Serena has nobody she trusts anymore, so we never hear any plans she may have spoken out loud, but we’ve previously seen her resourcefulness and her determination, so it is probably safe to say that she has been making plans as well. She realises that she has to be quick about it, too, because in an incredibly weird interaction with the doctor the Wheelers picked for her, she sees her entire future mapped out. She will birth this child; she will be forced to marry a stranger because being an unwed mother is unacceptable. She protests that this isn’t “really Gilead, is it”, but for these people, it is: they have another power and influence to make it so. The doctor even refers to his staff as a “Martha” – all of these weirdos are cosplaying Gilead, and there no one to stop them. Serena knows that the baby she’s about to give birth to is a ticking time bomb: once it arrives, any hope for freedom is lost to her. 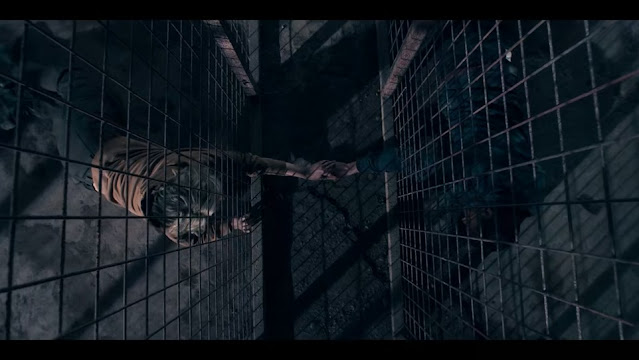 Luckily for her, the men that have captured June and Luke are Mr Wheeler’s: apparently he is running a whole operation that returns people who have fled Gilead. He is about to send Ezra there to end June’s life, but Serena somehow manages to plead with him to allow her to go, to see June die so she can tell her child that the woman who killed his father is dead. And of course, we’ve just spent a whole season seeing both June and Serena driven by revenge, June being unable to truly embrace her freedom in Canada and her togetherness with her family because Serena is like a thorn in her side. Why wouldn’t Serena want to leave simply to make sure that June is dead! But – we also know that Serena has lost a whole finger because she wouldn’t confirm to the set of rules she helped write. She is hungry for something that Gilead could never give her, a kind of political power that Gilead refuses women.

In Gilead, Esther has finally woken up from her coma and Lydia is at the hospital, checking that a procedure to “harvest her uterus” has been successful (jfc). The doctors tell her that they didn’t go ahead with it because Esther is three weeks pregnant, and things finally fall into place in Lydia’s head: Esther hasn’t been posted yet, but three weeks ago, she spent an afternoon with Commander Putnam. We never saw what really happened, but we felt the danger, and we saw how distraught she was when she returned. Lydia realises what made Esther decide to poison herself and Janine, the kind of trauma she endured. She takes that complain to Commander Lawrence, who in typical fashion is utterly cynical about it – Lydia insists there is a difference between rape and the ceremony, he insists that this is semantics. In the end, what tips the scales against Putnam isn’t that he raped Esther, it’s that he is a political rival to Commander Lawrence’s ambitions for New Bethlehem, and his transgression gives Lawrence the ability to get rid of a man he despises. He is dragged from a country club lunch with his, as always, ignorant wife, and shot on the spot by Nick for "raping unassigned property", a truly horrifying example of what happens to language in misogynist totalitarian legal systems.

Later, Lydia takes her Handmaids to the wall to assure them that they are protected in Gilead, that transgressions against them will be punished. Nick returns home to a wife who worries about him – and I am still fascinated by this dynamic, since their marriage is the closest to a conventional one that we have on the show. They live a relatively normal, privileged life in a totalitarian country. She is pregnant. She loves Nick, but Nick, because this is Gilead, is the kind of man tasked to kill people, and perhaps, deep down, even the kind of man who would enjoy putting an end to a monster like Warren Putnam.

In no-man’s-land, it’s time for the showdown that the show has been building up to. At the last moment, Luke is dragged away before June is put on a bus – and once again, they can’t even say goodbye, and June can’t protect him from whatever horrors await him. The bus stops, Ezra gets on board to get June, and then they stand outside in a shot that looks a lot like a Western, Serena looming in the background before June sees her and realises what is happening.

The scene works because there is uncertainty – it is unclear what Serena will do. She may shoot June, once she takes Ezra’s gone, once she explains she has to do this herself to get rid of her ghosts. But this is the last possible moment for her to escape – to allow all of their children to grow up in peace, as June pleads – and she already has contractions. Instead of shooting June, she shoots Ezra (who is wearing a bulletproof vest), and forces June to drive her away. How ironic that Serena’s plight for freedom depends on the woman she tortured.

Serena is impossible to root for, but it’s always worth remembering what an incredible job Yvonne Strahovski does, especially since her character has to be so much more contained than June.

Same goes for Mckenna Grace, who only has a short scene in the episode but it is absolutely harrowing.

I still think there’s a chance that the Wheelers ultimate plan was to steal Serena’s baby, but their whole set up resembles a gothic novel, and the way that Serena’s experience was shown felt modelled on the experience of gothic heroines, realising that they’re trapped in a horror story.

A great title for the episode as well: for the longest time, you'd think it refers to June and Luke, finally experiencing the horrors of Gilead together, but it turns out to be about June and Serena!