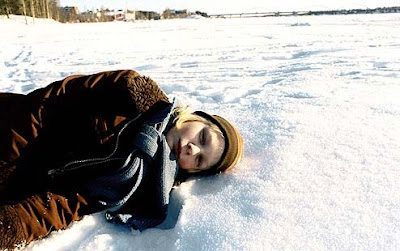 Before seeing this movie, I would have thought that the Vampire-genre was as dead as its subject matter. Any possible way of viewing the idea of more or less living things feeding off blood with a number of ever-changing abilities and antidotes has been discussed: the romantic one always connected to the decadence of another fin de siecle (Interview with a Vampire), existentialism (Abel Ferrara's Addiction), the sheer beauty of violent aesthetics (Blade).
Tomas Alfredson's take on the myth is different. For once, it has something almost all the previous movies about vampires lacked: subtletly. When we first see the vampire in question, the 12-year old girl Eli (played by Lina Leandersson) gently jumps off a snow-covered metal construction on the playground of the bleak apartment context on the outskirts of Stockholm. Or, on second thought, she floats down, in an off-putting, weird manner. That continues, as her first encounter with the main character ensues. Oskar, (Kåre Hedebrant) almost 13, has the kind of miserable early youth that breeds violence. He is the outcast in school, bullied by the other kids, suffering from the inadequacies of a single mother who is overwhelmed by her role. Before disappearing again Eli tells Oskar that they can't be friends. What might turn into the soft romance of two kids, actually is something entirely different: because, as the viewer finds out in the next scene.
Eli is not a 12 year old girl that just moved into the neighbourhood. As the man who takes care of her moves out with his tools to brutally murder a stranger in the woods to take his blood, we realize what she is: a creature that, without blood, turns into a violent monster. Just as Oskar's mom is unable to take care of his needs, her caretaker fails to deliver as well. He in inapt at this, fails twice in his attempts to feed her, and finally gives her the only thing he has left after trying to kill himself. So she is left on her own, in the neighbouring apartment, as Oskar slowly discovers what she is while, at the same time, feeling drawn to her.
As the film presents the different kind of relationships people in their surroundings are in, the viewer realizes that all of them lack warmth, love or even compassion. They are, in their core, violent, selfish, brutal. Eli and Oskar's is slow to emerge: once, she asks him if he would seek this kind of closeness if she didn't appear as a girl. His answer is vague: "I guess". By the end of the movie, as they flee the most eerie thing of the movie, the confinement of the apartment complex and the school where the only other ways out seem to be fights and drinking, it has become irrelevant what they are exactly as long as they stay together. But it took a bloodbath to get to this point.